Welcome to the new face of The Webcomic Overlook!

This domain name is reserved for the Webcomic Overlook! It’s not 100% up and running yet, so check out this site for the current home.

Recently, Homestar Runner did a great cartoon about webcomics. Strong Bad, or rather the Brothers Chaps, leveled some criticisms against popular webcomic types, like the gamer and fantasy subgenres. (“They’re all about video games, gamernerds, webgeeks, dorknerds, gamewads, nerdgames, webwebs, and elves.”)

However, some of the most pointed zingers were directed at the infamous ugly kid brother of webcomics, the sprite comic. I’ll let Strong Bad explain: “If you can’t draw, never fear, just steal some graphics from your favorite video game. And add yet another unlicensed pixel comic to the overcrowded, overstunk landfill of web comics.” Strong Bad’s quip of how you can “MS Paint your way to a non-punchline” wouldn’t be so funny if webcomics like Nintendo Acres weren’t doing it constantly. Even the Wikipedia entry on sprite comics reads like an extended derogatory insult on how terrible sprite comics are… and the entry was probably written by geeks pretty low on the heirarchy already, so there you go.

But do sprite comics have to stand for terrible, lazy artwork? Taken on its own merits, there is nothing wrong with pixel-style art. The blocky figures kindle a sense of nostalgia for the innocent days of Intel 486’s and Super Nintendo. And frankly, they’re just so simple that they’re downright cute. Once upopn a time, Trey Stone and Matt Parker turned kindergarten-style colored paper cutouts into the top rated show on Comedy Central. Why can’t sprites, similarly, escape the webcomic ghetto? Diesel Sweeties, for example, introduces a unique design aesthetic to the funny pages … though it helps that R. Stevens built his webcomic around original characters.

And then there’s the one that features characters from Final Fantasy I.

You know the one I’m talking about.

Bob and George may have been the first popular sprite comic, but any discussion of the pixel form begins and ends with Brian Clevinger’s popular fantasy comedy about four video characters wandering around the world doing magic and stuff, 8-Bit Theater. 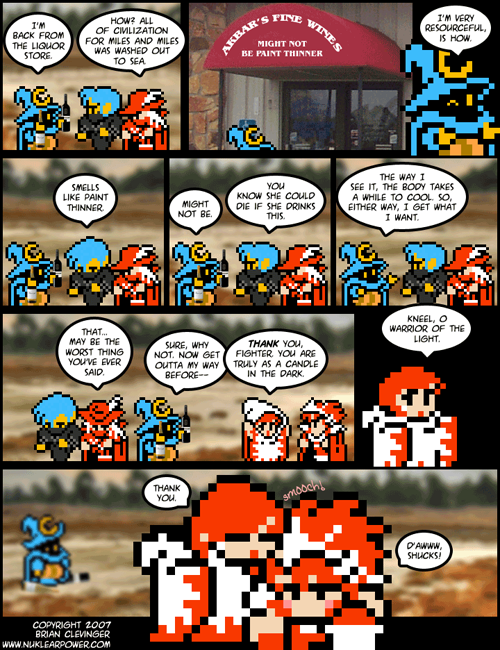 END_OF_DOCUMENT_TOKEN_TO_BE_REPLACED

Are furries people with a harmless yet weird hobby or an abomination to all humanity? What are we to think of people who suit up in custom made animal costumes and draw lurid anthropomorphic artwork? Most public perception has been negative. A furry gets killed on CSI, and we laugh. A furry gets virtually killed in SomethingAwful.com’s Second Life Safari, and we laugh harder.

A lot of today’s furry fandom is influenced by comic-style illustrations. Most of the time, these involve sticking an animal’s head onto a sexy male or female human body. I’m sure there’s a BS theory floating around among furrydom that their behavior is a natural outcropping of anthropomorphic traditions in Egyptian or Celtic mythology. More likely, though, the modern furry is influenced by comic books and cartoons. The latest wave seem to take their inspiration from Sonic the Hedgehog cartoons. Even before that, though, there was a huge wave of furry comic books in the late 80’s/early 90’s. Martin Wagner’s Hepcats was a highly acclaimed comic book that had animal-headed characters in mature situations. Reed Waller and Kate Worley’s Omaha the Cat Dancer was a reasonably acclaimed comic book that had cat-headed characters in erotic situations. And… well, there’s a whole slew of furry comic books with porntastic themes. Are furries really surprised why they’re held in such low esteem?

Thus, with so many things going against furries, the readers of “The Webcomic Overlook” — upon viewing the illustrations of today’s featured webcomic — may be struck with the sudden urge to hastily click onto the “Back” or “Home” button, fleeing in fear while nervously mumbling, “That El Santo. He has become one of them.” I have one word for you: DON’T. Because, like certain transforming robots, there’s more to this webcomic than meets the eye.

END_OF_DOCUMENT_TOKEN_TO_BE_REPLACED

I’m going to be out of town for two days, so I figured that today would be a good time as any to do a new review on the Webcomic Overlook. I had originally planned on reviewing another webcomic, and with luck that review will show up on this blog come Friday. Until then, though, this current review was spurred into action due to another review currently featured on a site whose sole mission statement is to make fun of bad webcomics.

The astute readers of The Webcomic Overlook may notice that none of the webcomics reviewed have yet received a rating below two. There are two main reasons why this is so:

I will, however, tackle the same webcomic if I thought the YWiB reviewers might have missed something. I did it before with my review of “Lowroad,” where I felt that Carlos G. had squandered a promising webcomic with excess fan service.

I’m reviewing today’s webcomic with a different purpose in mind. YWiB have actually been influential enough to cause a few of the creators to completely give up. Despite the fact that I agree wholeheartedly with Ted David’s review, I actually want today’s webcomic to succeed for some ungodly reason. 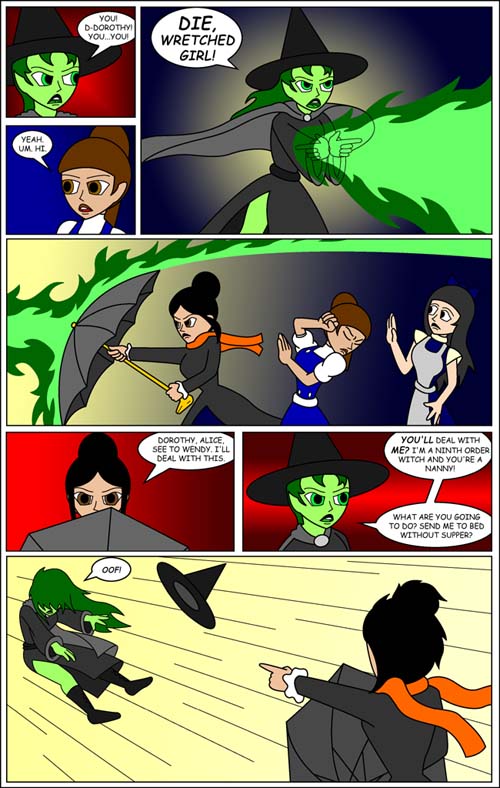 END_OF_DOCUMENT_TOKEN_TO_BE_REPLACED

The Webcomic Overlook #14: What Birds Know

Birds are fascinating creatures. They do not study college-level things like the Bernoulli Principle, yet they know to save energy by flying in a V-formation. They have a built-in instinct that tells them when to migrate from the Northern Hemisphere to the Southern Hemisphere. And there is a pretty good chance that they once dominated the earth 65 million years ago and were known as dinosaurs.

(I mean, c’mon … they were warm-blooded, they’re a chance they had feathers, and some of them honked and had duck bills. How long is it going to be before paleontologists finally admit that the world may have been dominated by giant chickens? I know it won’t help move those cool scaly dino toys, but for pete’s sake… it took astronomers, like, a month to decide that Pluto was no longer a planet, and that couldn’t have helped model solar systems sales.)

Yup, them birds sure know a lot of stuff. But what if birds possessed the knowledge of something else? Something … sinister? Enter Emelie Friberg and Mattias Thorelli’s webcomic: What Birds Know. 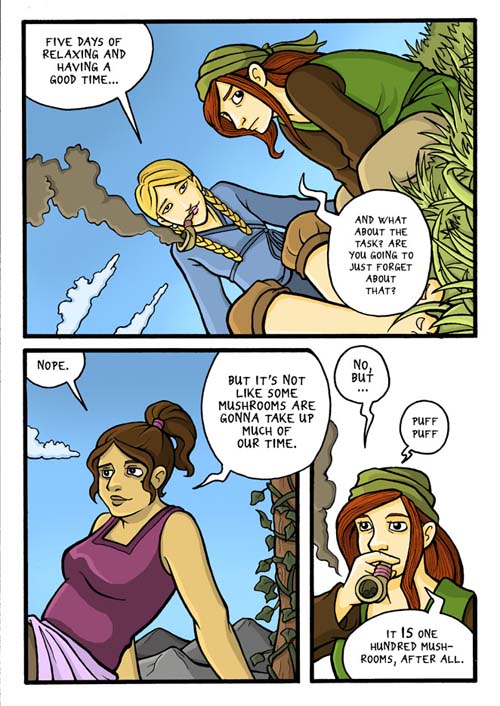 END_OF_DOCUMENT_TOKEN_TO_BE_REPLACED

Before I get to today’s subject (Dean Trippe’s Butterfly) allow me to go on a bit of a stream-of-consciousness rant. If you want to get to the review, start reading right below the picture. Good? Good.

One of the greatest and most eternal questions regarding comic books (the print kind) is … why in the world are there so many superhero comic books? This has been the bane of independent comic publishers. They can complain until they’re blue in the face that the medium can do so much more: romance, horror, social commentary. Are comic book readers just uncultured zombies, flocking to the cheapest form of escapist fantasy? Or do the Big Two comic publishers manipulate the market to ensure that the only comic books that ever make it into the direct market retailers are the ones featuring their core competencies?

The X-Axis’ Paul O’Brien wrote, in my opinion, the definitive essay on superhero comics. Here’s a quote from the article at Ninth Art: “Many superhero readers might describe themselves as comics fans, but only because of the common error that superheroes equal comics. Most, in fact, are not comics fans. They’re genre fans. There is absolutely nothing wrong with being a genre fan, but it doesn’t translate into being a fan of the medium. The reason why the North American comics audience is overrun with fans of the superhero genre is quite simple: where else are they going to get those stories? Yes, there’s a handful of TV shows and the occasional film. And there are some novels. But for the most part, those are just spin-offs of the comics. Comics have always been the driving force behind the genre. So if you’re a fan of the superhero genre, naturally you will come to comics for your fix.”

So, in a manner of speaking, the comic book is the best format for telling stories about superheroes. But if that were the case, how come superhero domination doesn’t extend to webcomics?

It seems counter-intuitive. But the reality is that webcomics actually boast more genre variety than print comic books. There are plenty of reasons for this. First, popular superheros tend to be long-term established ones, not newly created ones. Superman can penetrate the national imagination, but some blonde-haired jabroni named Sentry? Not so much. Secondly, most webcomic artists don’t seem to have the artistic chops to consistently draw someone with a superhuman physique. Hey, I’m in the same boat. When I took cartooning class, my art teacher once said that my “muscles” looked like hemorrhoids. And finally, interests change. Young webcomic artists aren’t necessarily reading comic books anymore. However, they are playing video games and reading manga… which, incidentally, explains why there are so many webcomics about both. Superheroes … that’s old people’s stuff.

However, superheroes haven’t completely disappeared form the webcomic page. At least, as long as you don’t take them seriously. Our costumed guardians live on in superhero parodies like the previously reviewed Year One, the silly Non-Adventures of Wonderella, the so-atrocious-it’s-pitiable Cow-Man… and today’s comic: Butterfly.
END_OF_DOCUMENT_TOKEN_TO_BE_REPLACED