On the Twelfth Day of Christmas my True Love Gave to Me….

Well, what else but the one webcomic that, since 1997, has been synonymous with Christmas storylines.

Fans of Sluggy Freelance know that Christmas is usually the time when Bun Bun goes on his anti-Santa rampage, fighting him even when he turned into some sort of acid-spitting alien. The traditional rival hasn’t been renewed since 2006 or so, but Sluggy still finds ways to spread some of that Christmas magic. 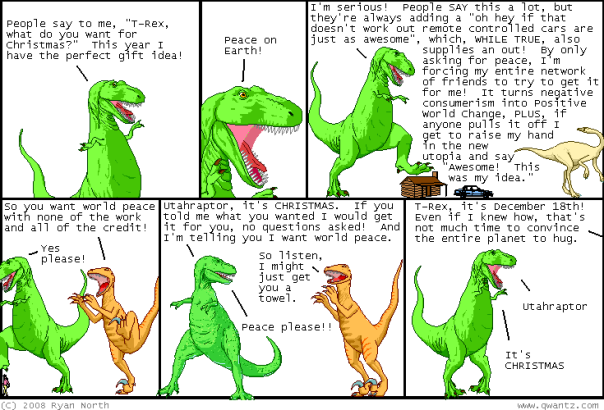 Over at Dinosaur Comics, T-Rex shares with us the secret of how to turn consumerism into positive world change with none of the work and all of the credit.

Cat and Girl shows that, on Christmas, you can always get what you want … but if you try some time, you’ll find you get what you need.

Even if it’s not really a Blackberry.

My stars and garters! Jingle Force Five from PvP looks awfully familiar. Is it because Professor X-Mas looks like Sigmund Freud? Yeah… that’s probably it.

The Webcomic Overlook #62: Grim Tales From Down Below

One day, I will be reduced to a quivering neurotic heap in need of serious psychiatric help. It’s a question of “when,” not “if.” And when I get the bill, I’m forwarding it to loyal reader Christopher. Why? Because of comments like this, which showed up in my review of Vinson Ngo’s, nee Bleedman’s, Sugar Bits:

Grim Tales From Down Below really isn’t bad in a fun way. I mean, the Powerpuff Girls Doujinshi is awful, but the nostalgic concept of having all the good cartoons fight all the bad ones is kind of neat, and reciting all of Dexter’s super-dramatic monologues in his trademark accent is fun. It moves along at a semi-brisk pace and it’s over quickly.

Grim Tales though… man. To answer an earlier question, yes, Mandy grew up, married Grim, and somehow had kids with him. And that is not NEARLY the most disturbing thing that happens in Grim Tales. And the thing is, unlike the PPG doujinshii, Grim Tales is INCREDIBLY BORING. It’s much closer to Sugarbits in that respect.

Read that again. Now ask yourself: is there anything in the world that would keep me from taking a look at Grim Tales? There are few things more alluring than cultural dreck. I may never have the guts to climb perilous cliff faces, go skydiving, or even think about braving the Moab in a flimsy little Jeep… but, goddammit, I can prove that I can survive the most mind-numbing movies, books, and comics known to man!

Even better, it seems that recently Grim Tales and the rest of the Bleedman Unholy Trinity (Sugar Bits, reviewed here, and Powerpuff Girls Doujinshi, reviewed here) has been brought back from the dead. On a chance click to the Snafu Comics site, I came to the joyous revelation that all three comics had been updated. My eyes welled with tears of morbid fascination. It was like Bleedman had given me an early Christmas present. Little did it cross my mind that Christopher’s post was not a challenge, but rather, a dire warning. Oh, if only I’d listened.

If there were a time to heed Dante Alighieri’s warning of “Abandon hope all ye who enter here,” this would be the time. It only took 10 pages for me to start clawing at my eyes. 30 pages for me to start muttering, “What the hell, Bleedman. What the HELL?!?!?!” And thus began my accursed descent into incomprehensible awfulness and stupidity.

END_OF_DOCUMENT_TOKEN_TO_BE_REPLACED

We discover the terrible truth that Santa never Sparty’ed On with Arthur at Dave Kellett’s Sheldon.

It’s O Henry all over again at Nedroid.com. Incidentally, I always thought the guy who bought the comb got the raw end of the deal because it would only take 1-2 months for the lady to grow her hair back.

At the End of The Year, There Will Be Lists

It’s the end of the year, and top ten lists are in fashion! One such list, from comic creator Bram Meehan (Raised by Squirrels) includes two digital entries: R. Stevens’ Diesel Sweeties and Kate Beaton’s livejournal site, Hark! A Vagrant. Two out of ten ain’t bad!

Shannon Smith, whose blog file under other “is dedicated to the study of and critical discourse on minicomics, alternative comics, underground comics and any other type of comic which you might consider to be ‘other'”, posits that the Best of 2008 includes American Elf, Anders Loves Maria, Demons of Sherwood, Paper Pusher, and the works of Dustin Harbin. Mr. Smith runs a very engrossing blog, one that I’ll likely visit more often in the future.