← One Punch Reviews #34: Motokool
Break out the “Scott McCloud Was Right” shirts… →

Ten Things To Know About the Future of Webcomics 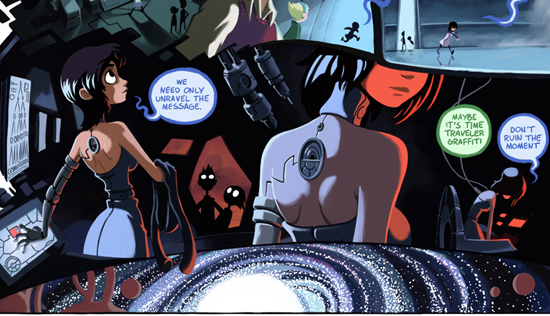 Shaenon K. Garrity’s controversial Ten Things to Know About the Future of Comics has been making waves lately. Some readers agree with the points presented. Judging from the comments and reactions, though, many more take issue, partially because the tone of the entire list was rather confrontational. Gary Tyrrell of Fleen was especially affected when she started talking about webcomics. Specifically:

5. But there is a canon. As best I can determine, the majority of comics-loving people under 30 have at least a passing familiarity with the following:

…and a handful of webcomics, but the latest big thing in webcomics shifts so frequently that I can’t even add titans like Penny Arcade and xkcd to the list with any confidence.

Is this the canon I would have chosen to lead the next generation into the great big beautiful tomorrow of comics? Probably not, but it’s not bad. Definitely better than the canon I cut my teeth on, which contained far more Batman than was healthy for the nerds of Generation X.

I don’t want to sound like I’m challenging Ms. Garrity’s expertise on the matter. She is, after all, managing editor at Viz Comics, which means that she has a better feel for the market than I do, as well as a webcomic creator in her own right. However, that list of stuff that under-30 readers have a familiarity with seems completely arbitrary. First of all… that list is hardly a very good representation of “general comic knowledge.” At least three of those (Death Note, Naruto, Watchmen) are on there because there was a TV show or a movie made out of them. Which is then contradicted by Ms. Garrity two points when she says that “Superheroes are not comic book characters” because people know them from other media.

(Incidentally, I have a weird feeling that Scott Pilgrim, the darling of the “comics aren’t for kids anymore” crowd, would have made that same list if the movie hadn’t bombed hard in theaters.)

But back to webcomics. Here’s something to consider: the top circulating webcomics get 680,000 (Penny Arcade) to 1.4 million (xkcd) unique visitors. Can most manga, which Ms. Garrity has promoted as the way of the future, really top that? Especially when 2010 has been marked with stories of how sales of manga comics have been declining?

But how about penetration with regards to public perception? I’d say it’s fairly strong at the moment. It was Jerry Holkins and Mike Krahulik who made Time‘s 100 People list, not Masashi Kishimoto (creator of Naruto, the top manga property of 2010, according to ICv2.com).

I will concede that Ms. Garrity at least raises many interesting things to think about, eventhough webcomics were once again given the “secondary citizen” status in a discussion about the future of webcomics. And from a webcomic veteran, too! First Joey Manley and now Shaenon Garrity? Personally, I think the future of webcomics is pretty bright, PHENOMENALLY BRIGHT, despite my own sometimes dour observations on this site.

So, as a response — mostly good natured — here’s my own list of Ten Things to Know About Webcomics, or 90% of this is stuff I’m pulling out of my butt but should make a handsome list to post on your kitchen refrigerator:

1.) Boys will eventually find a way to make it in webcomics. Unencumbered from the boys’ club system of the comic shop and the traditional bricks-n-mortar publishers, female webcomic creators have flourished. Kate Beaton, Meredith Gran, and Spike Trotman are probably even more well known that most of their male counterparts.

Boys? You need to step up your games.

2.) The webcomic canon will, in fact, replace the existing comics canon. Despite the breadth and variety of webcomics out there, plenty standards fuel the common discussion in webcomic threads. Comics like Penny Arcade, xkcd, Questionable Content, Megatokyo, MSPaint Adventures, Achewood, Perry Bible Fellowship, Hark! A Vagrant … and yes, CAD. You know what? I think that more people read these comics than read actual manga.

However, I do agree that manga does get a better grip in the consciousness of young people because its support in other media. Hence….

3.) Webcomic creators need to be picked up to be translated in other media — TV, movies, video games. Look, this is the number one reason superhero comics and manga are recognized by the public more than webcomics. Superman would not ever have gotten the kind of traction he did if not for radio shows. Naruto would be no where near as popular if it wasn’t for anime. Webcomics are approaching the day when they become valuable media properties. Right now, the foot in the door is video games, the infant media market which, thanks to the burgeoning indie games sector, has lowered the barriers to entry. Penny Arcade and Blade Kitten are there already, latching on the new media of choice for the new millennium like Superman did during the early days of radio. Who will join them?

4.) The Infinite Canvas will die. It’s fun as an experiment. However, it’s not working. And with iPad limiting the screen even more than the computer does, the canvas is shrinking and shrinking. What else is joining the infinite canvas? 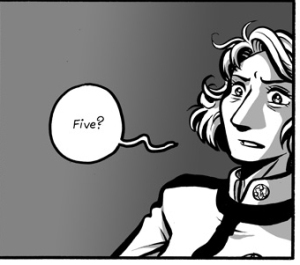 5.) Video game comics will completely disappear from the world wide web. Why? Because video game comics will be accessed through the same portal (the future XBoxes, PS3s, and Wiis) that provide downloadable content to gamers everywhere. Why go online when you can get your comics in the same place you play your games, watch your movies, and check your email? Incidentally, the video game as we know it will only be played by curmudgeonly diehards, like the pinball players of today. Everyone else will have moved on to holodeck games already.

6.) A regular schedule will become even more important than ever. Many successful webcomics seem to have settled into a twice or thrice a week updates. The once a week update? Just ain’t cutting it. Also, audiences aren’t getting younger. Hence, stretching out a year-long story that could’ve been covered in a month with better pacing just isn’t going to cut it any more. Economic storytelling is the future.

7.) Webcomics will gravitate toward corporate entities. It’s kinda disheartening when you look at Wikipedia’s List of Self Sufficient Webcomics and come to the realization that only 0.1% of webcomics ever made will ever make enough money to sustain their creators. I know that webcomic creators like to tout the benefits of independence. But, you know, that life isn’t for everyone. Wouldn’t it be nice to have alternative system where you can get paid and do what you love best: either storytelling or drawing?

8.) Webcomics will actually be key into injecting life into the moribund manga industry. Let’s face it: manga? They all look the same now. Zero innovation. That’s because of market pressures: the publishers need to sell, sell, sell, and that means taking very few risks. This site has, in fact, encountered several manga-style comics that have been pretty damn innovative: things like Spinnerette, Galaxion, and Moon Town.

Now, let’s take a look at that Top 25 Manga Properties chart again: Naruto. One Piece. Vampire Knight. Fullmetal Alchemist. Bleach. Are you trying to tell me that these aren’t all exactly the same thing?!?!?!? Seriously, if any innovation in the manga industry is to be had, it will be from people not stuck churning out the same cookie-cutter product.

9.) Eventually, some enterprising webcomic creators are going to band together and create a superhero universe that will rival Marvel and DC in media clout. Hey, why not? There’s still a big market for superhero stories out there, and with the Big Two now being hampered by the Time Warner and Disney media empires, webcomics provide an alternate choice for superheroes that are unencumbered by corporate nannyism. Even as recently as the 90’s, it was proven you could start a superhero comic universe from scratch. And I’m sure there’s a lot of people who would appreciate reading something that doesn’t cost $3 to $4 per 20 pages. Webcomics may not always be free, but darn it, they should be able to match that price point!

10.) There will come a day when “webcomics” will just be called “comics,” and what we know now as comics will be called “vintage print frolickery that grandpa got from these antiquated places called ‘comic shops’ and ‘book stores’.” Bank on it.

Somehow ended up reading and reviewing almost 300 different webcomics. Life is funny, huh? Despite owning two masks, is not actually a luchador.
View all posts by El Santo »

Posted on October 26, 2010, in The Webcomic Overlook, webcomics. Bookmark the permalink. 74 Comments.

← One Punch Reviews #34: Motokool
Break out the “Scott McCloud Was Right” shirts… →