One Punch Reviews #64: Next Town Over

One of the genres that has surprisingly thrived under the webcomic format is the weird western. Now, I ain’t saying that readers cotton it, particularly — the same way they cotton those comics what make fun of video games, I mean. Weird westerns, though, sure do cut a swell during awards time. High Moon, which is about the Wild West with werewolves, won a Harvey Award. Guns of Shadow Valley, which is about cowboys with superpowers, was nominated for an Eisner. It makes sense when you think about it. Weird westerns hearken back to the Golden Age of movies when heroes like John Wayne, Gary Cooper, and Clint Eastwood lit up the screen. At the same time, they play to more modern audiences when you add some sci-fi, the supernatural, fantasy, and steampunk.

Who could have imagined that The Wild Wild West was the future of storytelling?

Which brings us to Erin Mehlos’ Next Town Over. It sure is a mighty unassuming name. You hear it and you done think to yourself, “With a fancy title like that, this is surely some sort of romance comic.” Which, come to think it it, may not be all too far from the mark. At its heart, this is a webcomic about two lovers. They also have superpowers. And a couple of souped up horses. Set down a spell and you’ll see what I mean. END_OF_DOCUMENT_TOKEN_TO_BE_REPLACED

Some time ago, I was helping some folks clean up an old building downtown. I was there with my wife and a fellow helper. It was getting late… and our companion did the one thing you should not be doing when it starts getting dark: she started telling stories. Namely, that she had seen ghosts here.

She told us of two occurrences. She said she once saw a young girl playing near the pulpit. She seemed like a little girl who was just playing around, laughing and giggling and the like. The girl ran off to the back room. The lady went to check on the girl, but, as you might guess, the girl disappeared. The other ghost she saw was a soldier. The lady had done some research, and she found out the building next door was once an infirmary at the turn of the 20th century. She said that these ghosts weren’t dangerous. They were, in fat, rather friendly. She wouldn’t have thought them to be ghosts except that when she’d run after them, they’d disappeared.

Now, maybe I’m not the type of person who believes in ghosts. Maybe I had nothing to be afraid of, since it was made clear that the ghosts were harmless. Friendly or not, though, you best believe we shut off the lights, locked the doors, and got out of that building as fast as we could. The very otherness of a non-corporeal being is enough to get your hairs standing on end.

Zack Morrison knows this. There are many ghosts in his webcomic Paranatural. Some are dangerous. Some are not. But even the friendly ones possess the sort of innate creepiness that makes you want to lock the doors and get out as fast as possible.

END_OF_DOCUMENT_TOKEN_TO_BE_REPLACED

Back in the days when Matt Wilson was creating the webtoon series, Bonus Stage, he threw in a joke where the characters were getting excited about webcomics getting their own shows. The characters excitedly gab about Queen Of Wands and Penny Arcade.

Well, that day is finally upon us, as Axe Cop got the green light on Fox’s Saturday Night animation block. So, heroes, I bring the question to you: what other webcomic would make for a good animated series?

Hey, just a quick note to iPad users. The Onswipe feature, which lets you view the site in a magazine-style format, has been acting wonky for a couple of days now, so I’m going to turn it off. I’m going to check in with WordPress central to see what’s up. So when the site pops up, it’s going to show up same as the website. Not as sexy, but at least readable.

Animated Axe Cop? What the what?

Squarely hitting the entertainment sweet spot that unites 5-year-olds and the totally stoned, Fox has announced plans to develop Axe Cop—an adaptation of the web comic co-created by brothers Malachai and Ethan Nicolle—as the first addition to its burgeoning late-night Saturday animation lineup. For the unfamiliar, Axe Cop concerns a policeman who wields a firefighter’s axe (so it’s not just a clever name) as he battles crime with the help of various allies such as another cop who is also a flute but sometimes a dinosaur and occasionally an avocado, and a magical wish-granting baby with a unicorn horn. “What, did a little kid write this?” sneering skeptics ask, only to be chagrined to discover that, why yes, Malachai began writing Axe Cop in 2010 at the age of 5, and so those people should feel bad.

So there you go, folks. Axe Cop. The animated series. On FOX. And you know what? I think it’s going to work out. I mean… it can’t be more incomprehensible than 12 oz. Mouse.

EDIT: Now that I read Comics Alliance take on things, it turns out that Fox’s animation director is Nick Weidenfeld, who used to managed Adult Swim … which, once upon a time, aired 12 oz. Mouse. And, while we’re at it, Perfect Hair Forever.

Alright everyone, let’s talk about a man.

Just a man. With a man’s courage. He knows nothing but a man, but he can never fail. No one but the pure in heart may find the golden grail.

He’s the savior of the universe.

He’ll save every one of us.

King of the impossible. 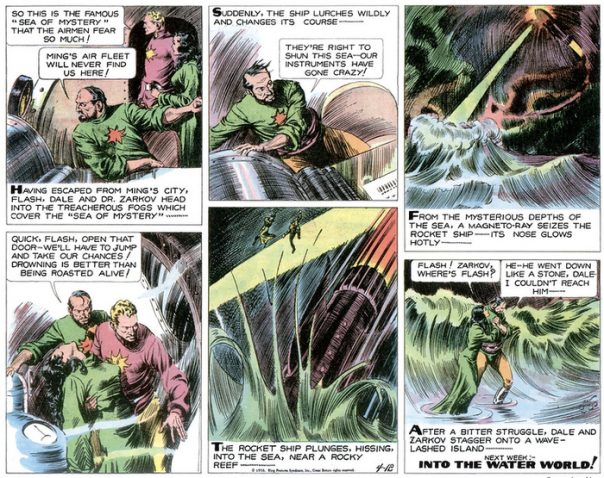 END_OF_DOCUMENT_TOKEN_TO_BE_REPLACED

Posted in comics, Know Thy History, The Webcomic Overlook

I’m not above giving shoutouts to promo giveaways on this site. Scott King, creator of Holiday Wars, is celebrating the launch of his second book with a giveaway. And what could possibly — ahem — kindle your interest about such a contest? Maybe … a Kindle? (Wordplay!)

To celebrate the launch of “Holiday Wars” Book 2 we are doing a massive three week contest where we will be giving away some awesome daily prizes; including a Kindle, and a Nook Simple Touch.

“Our readers have stuck around for almost two years now and we thought this was a nice way we could give back to them,” Holiday Wars writer and creator Scott King said. “Sure we are doing traditional prizes like gift cards and ebook readers, but I’m particularly excited about giving away copies of Scrivener and Manga Studio since HOLIDAY WARS was partially created in both programs.”

A full schedule and list of prizes can be found here: http://www.holiday-wars.com/Pics/prizes.jpg

In addition to the giveaway contest, we are also launching a new website and a Kickstarter to fund the printing of Book 1 of “Holiday Wars.”

About HOLIDAY WARS:
“Holiday Wars” is an ongoing webcomic about a teenage girl named Tegan Cassidy who discovers that the personification of holidays are real. The story takes place in our world and features well known holidays like Santa, The Easter Bunny, and April Fools as well as smaller observances like Ask A Stupid Question Day and Black Friday. The comic is free to read at www.Holiday-Wars.com.

About Scott King:
Scott King was born in Washington D.C. and raised in Ocean City, Maryland. He received his undergraduate degree in film from Towson University, and his M.F.A. in film from American University. “DAD! A Documentary Graphic Novel,” King’s first book was published in Fall ’09. He is also the creator and writer of “Holiday Wars.” In addition to his work in comics, King is also a part-time faculty member at the University of Maryland Eastern Shore.

There’s something about editorial cartoons that can be incredibly dangerous. Offend the wrong groups, for example, and you might find yourself running for your life. With televised, audio, or print media, you can build up or soften your argument by surrounding it with empirical evidence. There is rarely such a safety net for one-panel editorial cartoons. They are immediate an powerful in their brevity. The concise format strips the opinion to the stark naked core.

Josh Neufeld’s Eisner nominated webcomic, Bahrain: Lines In Ink, Lines In The Sand, follows the struggles of two editorial cartoonists living in Bahrain, a country caught in a politicl turmoil that, as of this writing, is still making news at the Bahrain Grand Prix. Neufeld has previously reported the personal stories of people caught up in Hurricane Katrina with AD: After the Deluge. Now he uses the same techniques, applied on a smaller scale, to take at look at the Arab Spring. It’s fairly short at 17 pages, but perhaps that’s as long as it needs to be.