The Webcomic Overlook #202: Scenes From A Multiverse

Nestled among the sands of the American Southwest lies a city where fortunes are lost under a kaleidoscope of gaudy lights: Las Vegas. There, last week, old men and some old women gathered at the Green Valley Resort to hand out awards named after a quick-witted man who spent his time drawing impossible machines. It’s tradition that dated back to 1946, when a group of cartoonists banded together to entertain the troops. They were here at the resort to hold a black-tie banquet evening to recognize excellence in cartooning. The past honorees are legend: Milton Caniff, Al Capp, Alex Raymond, Charles Schulz, Chester Gould, and Hal Foster, to name a few.

This year, however, an award would be given, for a the first time, to a comic that had been published entirely online. Two of the nominees had readerships in the millions: Penny Arcade, founded by two smartasses from Seattle who had parlayed their success into a larger media empire; and The Oatmeal, created by another Seattle cartoonist who successfully made a profit through poster reprints.

The third was by a guy from New York who had toiled in the webcomic world but had not met the same amount of success. He’d put together two webcomics previous to this one: one that was semi-autobiographical, and another with the unpronounceable name of megaGAMERZ 3133T. This one probably had the oddest concept: a series of small vignettes with few recurring characters set across different settings, which were located in separate universes.

That comic would be the eventual winner of the first Reuben Award for an Online Strip: Jon Rosenberg’s Scenes From A Multiverse. (Gary Tyrell, a judge at the Reubens, posted a first-hand account of the events here.)

It was a boon to Mr. Rosenberg. I looked at the Project Wonderful stats right after a win, and pageviews were up from a typical 24K to a very respectable 120K. To be fair, though, a lot of that new readership arrived from a gracious link posted at Penny Arcade, where Mike Krahulik praised Mr. Rosenberg for being “a great guy and talented cartoonist.”

I think it deservedly won, a point on which I’ll elaborate later. 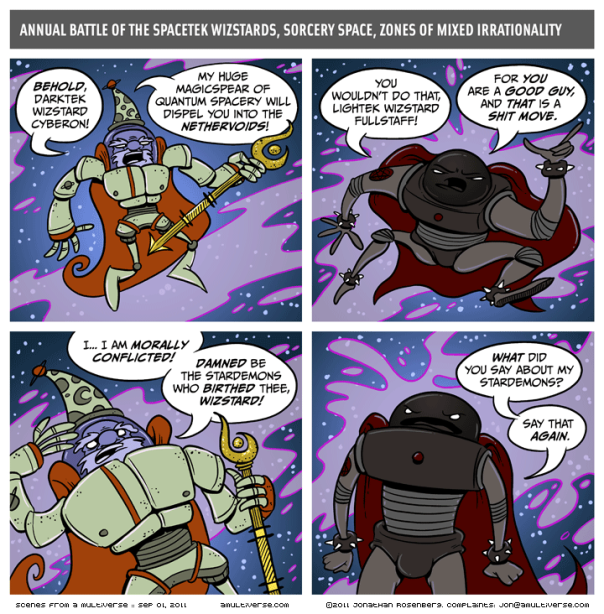 END_OF_DOCUMENT_TOKEN_TO_BE_REPLACED

Reubens are awarded for things other than sandwiches

Apologies for not being up to date, but here in the States it was Memorial Day weekend. I had to deal with two picnics and one trip to the clinic — strangely not for getting my stomach pumped but for getting cured of my clogged ear. (Yuck.)

So with that pleasant image logded in your mind, I should remind you that the National Cartoonist Society awarded its first ever Reuben to a webcomic. And that award went to — ta ta ta dah! — Scenes from a Multiverse, by Jon Rosenberg, which beat out The Oatmeal and Penny Arcade. It’s too bad I don’t have a Sugarshock-o-meter for this one, since I had a feeling that this would be the easy winner. But honestly … it’s the Reuben. You know … the one where The Duplex also won an award for best comic strip.

NOTE: I should point out, by the way, that the Reubens were actually named after one Rube Goldberg, who was awesome.

Today’s Follow Friday is Lily and Zentheas, by Edgar Recinos.

“Lily Mageworth is an unwieldy, low level Mage fueled with ambition to become the greatest adventurer in the online world of Solendium.

Zentheas Sylvant is a mid level Berserker with an ironically laid-back attitude and little interest in putting an effort in anything.

The only thing bringing these clashing roommates together, besides the fact that they’re both programmed into a video game, is the recurrence of a nearly impossible Quest: keeping up with the rent.

In order to avoid the wrath of their creepy landlady, the two must embark on various amazing and unpredictable Quests that will put their lopsided fellowship to the ultimate test.”

Elzie Crisler Segar grew up in the small town of Chester, Illinois, where he worked at a theater. This being the silent era, he helped out with the musical accompaniment to the films by playing on the drums. Eventually, he got a job as a projectionist. Cartoons eventually caught his fancy, and he took a correspondence course from a fellow in Cleveland, OH.

After Segar moved to Chicago, he met up with Richard F. Outcault, who was a bit of a cartooning pioneer and superstar after creating The Yellow Kid and Buster Brown. Outcault helped Segar network, where he bounced from one comic to another. Eventually, he ended up at the New York Journal, where he debuted his new comic, Thimble Theatre.

The comic seems to draw experiences from Segar’s theater days. There was a regular cast of characters. The main one was Harold Hamgravy (later just known as “Ham Gravy”), a sort of clueless everyman with a fondness for drink. There was Bondo Bitter, a Dirk Dastardly sort of fellow with all the accoutrements, such as the fiendish little mustache that wants stroking. And then there was Ham and Bondo’s love interest, a rail-thin gal that you may recognize as the one-and-only Olive Oyl.

END_OF_DOCUMENT_TOKEN_TO_BE_REPLACED

Posted in comics, Know Thy History

Hey, kids! Do you like webcomics? Sure you do! But do you think that webcomics have gotten a little … sissy these days? You read Penny Arcade and you say to yourself, “You know, dickwolves was funny. But it sure could’ve been a lot funnier if they’d actually shown the rape. And in graphic detail.”

To which I say: “What the hell is wrong with you?”

But, boy, do I have a comic for you! It’s a little something called Shädbase, by a creator who goes by “Shadman.” It’s a darkly humorous take on pop culture. Shädbase takes references from video games and cartoons, and it physically forces itself on those references without any consent, horribly abusing those references with blunt force trauma, and violating and humiliating those references until they’re emotionally scarred and bereft of dignity.

Suffice to say, links contained in this review are not going to be safe for work.

END_OF_DOCUMENT_TOKEN_TO_BE_REPLACED

Today’s Follow Friday is Sandhill. (I’m leaving the author’s name out of it for now since it doesn’t show up in the comic itself.)

“The comic loosely chronicles the lives of a bunch of weirdos who reside in the titular town.
Sandhill is the kind of small town rock and roll singers are always running away from.
Originally built as a mining outpost during the second world war, with the sole purpose of making sandbags for the eastern front.
During the few years the outpost remained operational, the hill was depleted of nearly 70% of it’s original mass and what
remains is a monument to the futility of war or something. Only one tree remains on the hill, legend goes it was planted
there by an unnamed soldier to commemorate the hills contribution to the war effort.
How the tree manages to subside on what is basically a big pile of sand, however, is anyone’s guess”

For some reason, webcomic creators really love mashing two unlikely subject matters and making a story out of it. (Though, to be far, it’s not only webcomics. Abraham Lincoln: Vampire Hunter, anyone?) There are doctors who are also ninjas, doctors who are also dirtbike riders, dinosaurs who are ninjas, cops who have axes, barbarians who are Americans, and American patriots who are rock stars. It embraces an internet appetite for the absurd, which is why it’s actually fairly amazing that a lot of these comics can actually maintain a long term story.

I mean: think of that movie, Snakes On A Plane. Why did that fail? The biggest one was that once you got the title, you pretty much got the whole joke already. On the other hand, The Adventures of Dr. McNinja has been going strong for 8 years now. I think the webcomic format is more suited for silly ideas like these. They feel far more like they’re genuinely off-the-cuff and not focus-grouped to death. It doesn’t have to be dumbed down to reach as wide an audience as possible. It only needs to reach the fans of eccentric humor … which are not in short supply on the internet.

And now, something with a mash-up premise is a nominee for the Eisner Awards: Battlepug, created by Mike Norton, who’s done work in the comic industry (Runaways, Queen and Country, and Young Justice to name a few). You mash together a barbarian and a giant pug. What could go wrong? 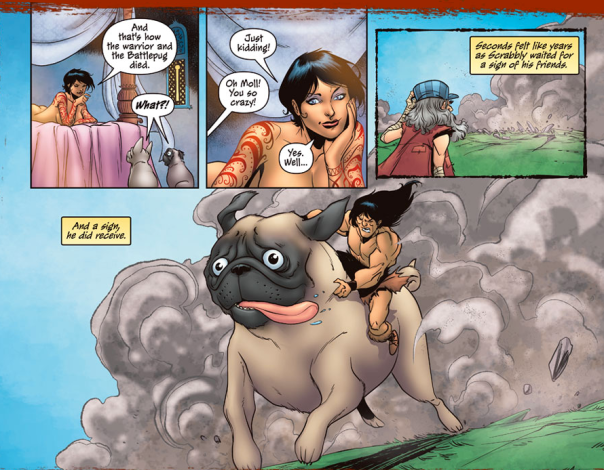 END_OF_DOCUMENT_TOKEN_TO_BE_REPLACED

Webcomic short stories tend to make a big splash with two audiences: the people who read Reddit and the judging panel of the Eisner Awards. In 2009, for example, a whopping three short stories were under consideration: Speak No Evil, Vs., and The Lady’s Murder. A fourth, Bodyworld, was longer, but structure to come to a finite ending. It’s a format, that, in a way, is more appropriate of an award that bills itself as “The Oscars” of comics. There’s a complete story, a more cohesive theme, and character progression… things that Oscar-worthy movies are typically judged by.

This year, we also have three short stories vying for the Eisner. There’s Sarah and the Seed (which I looked at here), perhaps the shortest work every submitted for Eisner consideration. There’s Bahrain (which I took a look at over here), which muses about politics in the titular country.

Then there’s Outfoxed by Dylan Meconis. Ms. Meconis has, perhaps, more webcomic-cred than the authors involved in this year’s round of Eisners. Her previous works, Bite Me and Family Man, have taken a look at classical horror elements (vampires and werewolves) in historical settings. There’s nothing of the sort in Outfoxed. I mean, maybe a werefox… if that’s a thing.