Suddenly Webcomics: Top 10 Google results for “webcomics” with the Penguin

Recently, I came across an article on the venerable AdAge site entitled “How Google’s ‘Penguin’ Update Will Change Publishing, for the Better”. If you’re me, your brain was filled with an image a squat guy in a top hat and monocle taking over the offices at John Wiley & Sons with a loaded umbrella. 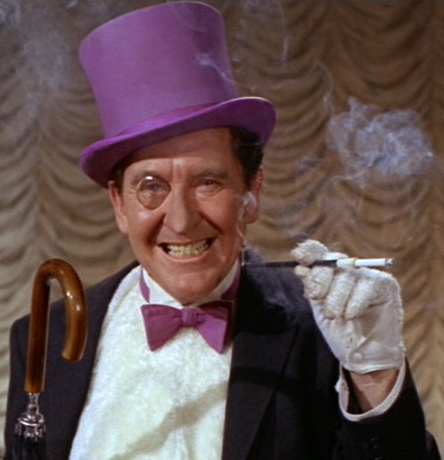 It turned out to be something better: an article extolling the virtues of Google’s new SEO — named “Penguin” — which went live on April 24, 2012.

Over the past decade, the publishing industry been swinging on a pendulum created by the effects of search engine optimization (SEO). In the old, primarily print days, the most successful publishers were those that could produce great content for a specific audience and keep that audience engaged via subscriptions or at the newsstands. More recently, the kings of publishing were those that could best engage web crawlers and monetize their sites through a windfall of free search traffic. The focus has been less on creating great content and engaging readers than on producing lots of words on lots of pages to engage web crawlers.

But there is a silver lining to all of this. With last year’s Panda release, and the more recent Penguin release, Google is going to flip SEO on its head. If Old SEO enabled some to fool a crawler into indexing borderline junk content to get high rankings, New SEO looks likely to take any notion of fooling anyone out of the equation.

To feed the search rankings with New SEO, publishers must be thinking about the discovery side. How can they get more engaged people discovering their content and engaging with it outside of Google? Ironically, a New SEO expert will probably need to focus more on Facebook than on Google to improve search rankings. The same goes for brands that are investing in content creation and content marketing. To be successful, everyone needs to play by the New SEO rules.

With New SEO, the pendulum is finally swinging back to favoring humans over crawlers. The New SEO rules point directly back to what was valued in the traditional print-dominated days — content will not be a mechanism to convert clicks but a tool to boost awareness, increase overall engagement and offer opportunities to connect with a quality audience. And the “customer” that content is tailored for will no longer be SEO bots (the software apps that work the web automatically), as the New SEO favors the true end-user: the reader.

This was very heartening news. Recent web searches on Google had left me cold. Like, I googled “fantasy football helmets” to put together a logo for my league, and I got some of the worst designed sites imaginable. (Of course, that could be my fault. Who in the world googles up “fantasy football helmets”?) Wither the Google that wouldn’t spit out the most spammy websites ever visited? Then I thought to myself: hey, let’s put this theory to practice. If I googled “webcomics”, what would I get under the results?

END_OF_DOCUMENT_TOKEN_TO_BE_REPLACED

Ladies and gentlemen, I have some very sad news: I’m cancelling Mars Week. I knw you were looking forward to the parades with a giant Marvin the Martian balloons, a public reading of Ray Bradbury’s The Martian Chronicles, the contest to think up with a better Martian rover name than “Curiosity,” and free Mars Bars for the kids.

But I only have myself to blame, really. Earlier this week, I thought to myself: “Self, why don’t you finally review that other Mars-themed comic? Uh, what was it called? Red’s Planet?” It was a full-proof plan… until I reached the end of Red’s Planet and realized it had nothing to do with THE Red Planet. Fortunately, though, I have no regrets reading Eddie Pittman’s Red’s Planet. I’ll come right out and say it: it’s the most delightful webcomic you’ll ever read about Mars that will turn out to be not about that at all.

END_OF_DOCUMENT_TOKEN_TO_BE_REPLACED

Recently, I’ve been reading Kim Stanley Robinson’s Red Mars, a fairly methodical (yet still enjoyable) novel about the colonization of Mars. The main theme that emerged throughout seems to be that Mars sorta transforms its inhabitants into adverserial jerks. It’s not the only book to come to the same conclusion. Edward Rice Burroughs’ Princess of Mars is populated by a bunch of irascible aliens. The aliens from Mars Attacks! are murderous pranksters. And so on and so forth.

I think much of that characterization is taken from the nature of the planet itself. It’s defined by the color red — which is the color of blood, passion, and madness. It’s dusty and desolate, reminding us of the hardscrabble life of the Wild West. And it’s named after the Roman God of War. Violence seems to be the logical conclusion. So it is in the world of Dave Pauwels and Nicolas R. Giacondino’s Free Mars, where the red planet seems to be in a permanent state of debauchery (NSFW) and revolution.

END_OF_DOCUMENT_TOKEN_TO_BE_REPLACED

Matt Inman gets money to build a Tesla Museum

No matter what you may think of Matt Inman’s The Oatmeal, you’ve got to admit that they guy knows how to get viewers onto his site. That talent has gotten him surprising results on his unlikely indiegogo project: building a museum dedicated to inventor Nikolai Tesla.

In 9 days, we managed to raise over 1 million dollars to go towards buying back Tesla’s old laboratory, and with the $850,000 matching grant from NY state this puts us at 1.85 million bucks. At its peak, the campaign was raising $27,000 per hour, crashing Indiegogo, and probably setting some kind of land speed record in awesomeness…

Even though we’ve already hit our goal, I plan on letting the campaign run the full 45 days. Every extra penny we earn will go toward restoring the property, building exhibits, and turning this land into something worthy of Tesla’s awesomeness. The original goal of $850k was enough money to bid on the property, but it’s going to take a lot more to turn it into an actual museum.

The non-profit behind this endeavor is beginning the process of working with the realtor to make a bid on the property. I’ll post any major updates here, or you can follow them on Facebook and Twitter.

So… people on the internet really like that Tesla, huh? In all seriousness, though, it’s actually kinda nice to hear about webcomic creators raising funds for philanthropic efforts, so congrats to Matt Inman and The Oatmeal.

Marlo Meekins is a Silver Nosey winner. I had never heard this award before, but it is apparently awarded to excellence in caricatures. It’s not hard to see why she won.  Caricatures, though, aren’t her only strength.  Whether she’s illustrating young girl anxieties, her love for Adventure Time, the sexual politics of farting, her struggles with Internet addiction, or just being a plain old goofy gus, Ms. Meekins is guaranteed to deliver delightfully funny yet elegant illustrations that have verve and style to spare.

The Webcomic Overlook #208: The Dreadful

Imagine you were in charge of a roller derby team. “What?” you say. “I came here for webcomics! What is this… the Roller Derby Overlook?” But just bear with me for a second. Imagine you were designing the mascot. What would it look like?

The character will pretty much have to be a devil. It’s an inversion of the traditional goody-two-shoes type that, I don’t know, shop at malls and go into marketing. It’s a sign of rebellion. Feistiness. Grrrrrrllll power. Besides, who’s ever heard of a roller derby team without a devil as a mascot? That would be ludicrous. That’s like designing an NBA logo without a basketball in it. So we start with a devil, preferably a shapely female to show that world that your team is both sexy and oh-so-dirty.

But… shoot… everybody has a sexy devil as their logo! How do I distinguish my mascot from every other mascot out there? Well, if the team’s called, say, the “Rat City Mavericks,” then the answer is simple: put some cowboy gear all up on that hottie! But it’s gotta be formfitting, lest you diminish the sexiness of it.

In the end, you would have a character that looked a lot like Kit, the protagonist of Matt Speroni’s The Dreadful. 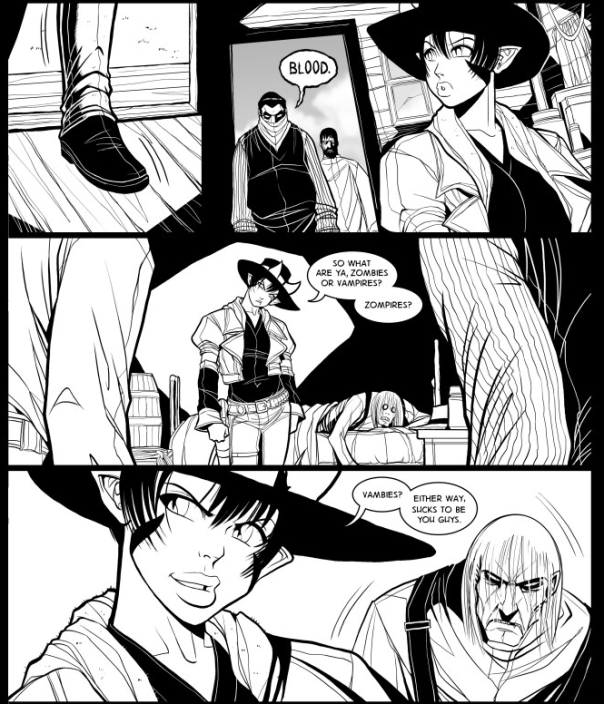 END_OF_DOCUMENT_TOKEN_TO_BE_REPLACED

Imagine a story centered around a nomadic tribe. They voyage the plains, perhaps resembling the African savannah. They live a sort of insular lifestyle, dealing with issues on a small, community-based level. What do we do when the herd we’ve been tracking suddenly moves? How do we deal with conflicts with neighboring tribes. And so on and so forth.

Suddenly, though, this tribe comes across a huge Empire that has ambitions for expansion. The Roman Empire, lets say. One of the people in that tribe is suddenly conscripted into the service of the Empire, and must now deal with a frightening new world, with new moral standards, a stratified class structure, and people who don’t look very favorably upon a simple tribesperson from the plains.

The set-up is pure Joseph Campbell and is a very popular one to use in historical or fantasy fiction. It sounds a lot like Conan the Barbarian, in fact. But … what if Conan was a girl? … OK, that’s just Red Sonja. BUT … what if Red Sonja was also a salamander creature?

While you’ve still got a way to go before this analogy starts making any sense, your starting to get close to Evan Dahm’s lastest incursion into the Overside: a little webcomic about a female, sword-wielding, salamander creature named Vattu.