← Who Are You?: An Interview with Henry Kuo (Just The First Frame)
Poll: Sluggy art →

Stories of disenfranchised youth are all the rage these days. None strikes to the heart as much as the story of a young greaser named Ponyboy. (I should probably make this clear in this day and age that he’s not named “Ponyboy” because he’s way into My Little Ponies.) The rich kids are known as the Socs — short for Socials. Early in the story, Ponyboy gets attacked. This bings to a head a class struggle set against a dusty Oklahoma setting. After a tragic incident occurs, Ponyboy soon finds himself many miles from home, trying to sort things out and in the processes becoming wiser than when he started.

OK, look. Time out. Obviously I didn’t really mistake the infamous S.E. Hinton novel — whose movie adaptation launched the careers of Tom Cruise, Patrick Swayze, C. Thomas Howell, and Diane Lane — for today’s reviewed webcomic. I mean, geez, this isn’t Young Adult Novel Overlook. To tell you the truth, though, Jim Francis’ Outsider is not that much different. Just substitute Ponyboy for Alexander Jardin, the Socs and the Greasers with the warring Loroi and Umiak, and Oklahoma for outerspace. It’s fairly easy to confuse, admittedly, so here’s the big difference. The Outsiders is the one you were forced to read in junior high. Outsider — no “s” — has alien space babes.

There should be no question which one here is the superior product.

The world — nay, the galaxy — of Outsider is one of humans from the outside looking in. Popular space operas like Star Wars, Star Trek, and Mass Effect have humans as the driving force behind the big events. Here, though, humanity is only in a position to react.

The Loroi and the the Umiak are engaged in intergalactic war, and everyone in the galaxy is caught in between. Humanity is first warned of this war by the Orgus, a race of aliens who look a little like elderly Kermit the Frogs. They are refugees. They tried to stay neutral, but discover that this is impossible. By refusing to choose a side, they invited attack. Humanity must choose a side in the conflict or risk extermination. However, the Orgus also warn that both sides are pretty much terrible.

Such matters, though, cannot be decided hastily. After all, what if you chose wrong … and you ended up on the losing side? A scout ship is sent. The art of Outsider, by the way, puts me in a nostalgic mood as it reminds me of 1980’s anime. Specifically, Robotech. The scout ship, for example, looks like it should be escorting the SDF-1 to a battle with the Zentraedi.

The scouting mission is cut short, though, when the ship is sliced in half by an unseen malefactor. A… phantom menace, if you will. It’s cut in half, sending the crew scrambling. Alexander Jardin, Ensign Second Class, is tossed into space following a massive explosion. He finds himself floating alone in the deep vaccuum of space, like Commander Shepard at the beginning of Mass Effect 2. Alexander becomes increasingly unsure whether anyone else made it out alive. At the same time, he’s losing blood and losing air. So, he desperately sends out a distress signal. 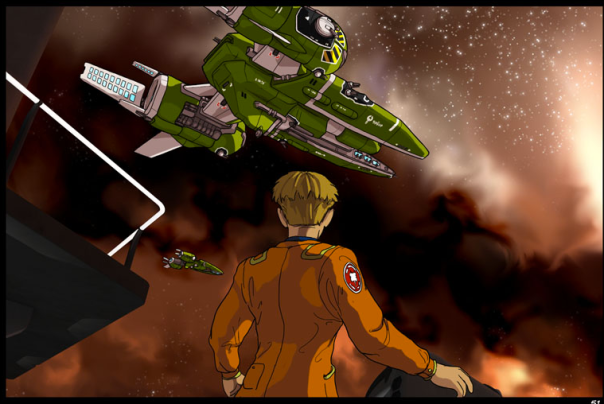 He’s eventually rescued by sexy alien babes who resemble dark elves. They even have names like Beryl, Tempo, Stillstorm, and Fireblade, which sounds a lot like something you’d make up for a Dungeons and Dragons campaign … or, uh, G.I. Joe characters. It turns out that these are the mysterious Loroi, and Alexander is the first human being they have come in contact with. (I admire Alexander’s restraint, by the way, for not waking up from his space coma by going, “Whoa! Alien hotties? I musta died and gone to space heaven!” like some horny sidekick in an 80’s teen comedy.)

It’s fortunate for Alexander, too, since the opposing force, the Umiak, look like a bunch of space cockroaches. Space coackroaches that can’t speak no proper space English, I might add. Seriously, though, when you’ve got space cockroaches on one side, alien babes on the other, which one would you rather be rescued by? The Umiak would probably complain about how they were being neglected by their family and how they used to be traveling salemen until a mysterious condition metamorphosed them into a monstrous vermin or something.

However, many of the Loroi are also patronizing space jerks. On their world, males are in short supply. As a result, the men have to stay at home while the women travel the galaxy, conquer worlds, and subjugate other races to their will. (From what we see, the others include aliens that resemble The Brood and Green Lantern Kilowog.) Thus, Alexander is already at a disadvantage. The Loroi already view him as weak for being a male. They observe, not incorrectly, that Alexander is not much of a warrior.

However, Alexander discovers that he has an ace up his sleeve. The Loroi are telepathic, yet, for some reason, they have a hard time cracking human minds. This advantage leads the Loroi to appoint him as Earth’s unlikely diplomat. Perhaps they figure to keep him under study until they can figure out what to do with these pesky humans. Alexander’s presence is already disruptive though. Upon discovering his existence, one alien makes the realization that the Loroi have not been forthcoming about … something. The full extent of the issue has yet to be explored. (I imagine it’s along the lines of, “You liar! You told me alien space babes were only into big, burly Kilowog men!”)

The art for Outsider is a mix of 3D computer generated models and more traditional illustrations. It’s a little distracting at first. By the time we get to the giant space battle, though, it’s easy to ignore since the action more than makes up for it. I especially like the lasers, which light up the panels like everyone’s in a big space rave.

Outsider is a very talky comic. Panels upon panels are filled with word balloons, explaining to Alexander what the situation is. I imagine this is a necessity. Science fiction places you in a strange world, and you do need someone to explain to you what the situations are fairly early on. Alexander here is the reader surrogate. Yet, I think that a lot of this could’ve been presented better visually. When Alexander is getting the info download, he’s usually just sitting or standing across from another character. While it never really grinds the comic to a halt, I do tend to feel the slightest onset of inertia whenever a bunch of exposition is dumped on me.

This being webcomics, a visual medium, I wonder if a lot of it could’ve been illustrated, perhaps in a flashback. Actually, since this is the future and everyone’s flying around in spaceships, you’d image you can even segue to a scene where one of the characters is showing Alexander a video or a hologram. Something, perhaps, like the Geth mission on Mass Effect 3. They could have had Legion explain how the Geth/Quarian conflict came to be through dialogue alone… which, to be fair, is an often-used tactic used by the Mass Effect franchise. In the side quest, though, legion downloads Shephard’s consciousness into a computer network and introduces him to holograms of the events that happened. It’s visually engaging, and it breaks the information down into manageable, more memorable segments.

If that proves too unwieldy, the talking parts could at the very least be spread out a little more. Too many times, a long paragraph hanging over the same picture of the character. It sorta robs the story of the opportunity for fleshing out the characters by depicting reactions, facial movements, or body language. This doesn’t happen all the time, though. There’s glimmers of this when Alexander is talking to the gentle Beryl. Her curiosity is reflected in her eyes. Her genuine, understate interest about the differences between Loroi and human culture help to establish her as a welcome friend in a sea of distrustful faces.

Still, this is just a minor quibble. It doesn’t derail the story, which is, so far, turning out to be a good one. Outsider is very effective in setting up the intrigue of Alexander’s situation. It’s telling, I think, that Alexander is just an observer and not an active participant in the space battle that we see. He may eventually. Yet, in some way, the Loroi are right… he’s not a warrior. Not one in the physical sense, at least. But what he lacks in physicality, he makes up for in mental toughness and cunning. His battle will be a more mental one. His association with the Loroi is right now a matter of convenience. It’s not clear if they’re the right side to back in the conflict just yet. Yet neither will it do him … or humanity … any favors to antagonize them at this early a stage.

Stay gold, Guardian of the Garden!

P.S. Outsider also contains cameos by the likes of fellow webcomic creators like Dylan Meconis and Faith Erin Hicks. If you plan on reading this comic, see if you can spot ’em without cheating!

Somehow ended up reading and reviewing almost 300 different webcomics. Life is funny, huh? Despite owning two masks, is not actually a luchador.
View all posts by El Santo »

← Who Are You?: An Interview with Henry Kuo (Just The First Frame)
Poll: Sluggy art →