Happy Halloween, y’all! This week has been spookily busy for me (long story short, two kids’ parties where I was a clown making balloon animals) so I couldn’t get to my last review before today. However, Chris Sims over at Comics Alliance is always vigilant, and he’s put together a nice list of five Free Halloween comics you can find online. These include:

Read those comics, if you dare!

From Frank Page’s Bob the Squirrel 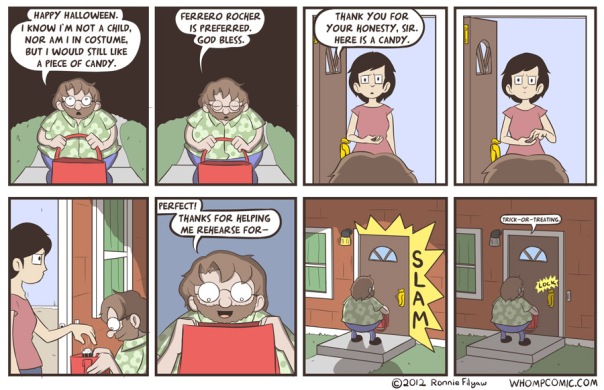 Know Thy History: Tales From The Crypt

Greetings, boils and ghouls! Imagine you lived in a day with no iPads, no smartphones, and no internet. Chilling, isn’t it? But dig back further. Imagine a day where not everyone had a television… and those who did had only three channels! Positively ghastly! How would a young man or woman like you spend the day? I’d imagine that most days would be … deadly boring.

But for some people, there were comic books. Bright four-color magazines stacked at your local five-and-dime. Surely, this was harmless fun! Perhaps you’d read about a man zooming about the clouds! Or stories of little children getting into troublesome shenanigans! Maybe there was a story about an elderly duck who goes on globe-trotting adventures! There was a lot of fun in comics. Little do you know that your innocence is about to be be murdered.

You find another comic. One whose cover is full of lurid imagery and a bold, drippy title. You open the book. Before you know it, you’re introduced to a dark, demented world of wickedness and gore. Yur mind becomes filled with violent and seductive thoughts. Wicked, murderous thoughts flow through your veins. Oh, and what is that ad for in one of those paiges? Is that an air rifle? It would be a bloody shame if you decided to take things too far….

That’s the line of thought that pervaded the Seduction of the Innocent, Fredric Wertham’s infamous book critiquing the gruesome images in several crime/horror titles, especially those published by EC Comics. Among those titles was one whose reputation would eventually outlast the Comics Code: a titled called Tales From The Crypt. 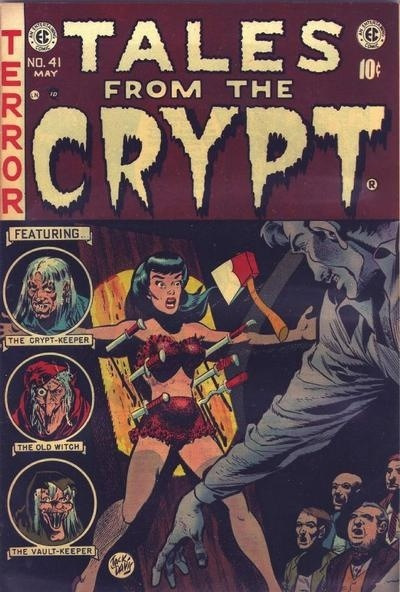 END_OF_DOCUMENT_TOKEN_TO_BE_REPLACED

There’s something about horror that’s perfect for anthology series. After all, the entire format almost entirely depends on some sort of ironic and sudden conclusion. The mystery and the shocks sometimes contain more impact the shorter you keep the story. Make it longer — like, say, what the movie The Box did to a compact story written by Richard Matheson — and it can get a little too convoluted for its own good.

The most infamous example in comics is a publishing firm called Entertaining Comics … or, as everyone knows them by, EC Comics. The publisher worked on several anthology comics — from crime fiction to military fiction to science fiction. Its most enduring title, though, was its horror anthology: Tales From The Crypt. It was a magazine borne from the fires of World War II. Boys who were forced to endure the horrors of war just weren’t happy with the kiddie superhero stuff anymore. They were men now, daggumit! They wanted to see blood and gore, sex and violence.

Tales From The Crypt, though, would eventually run afoul of special interest groups and, eventually, the United States Congress. The anthology format lives on, though, especially in horror-themed webcomics. A couple of years ago, I took a look at Split Lip, which hopped from one macabre story to another. It was highly effective in compactly telling each horror story.

It’s not the only horror anthology out there, though. Today, we look at Mike Walton’s False Positive.