My latest review is at Comic Fencing. This time, it’s about Multiplex, and I give you fair warning… I didn’t like it. At all. But, I’ll be frank with you, it could have been worse.

Read my review of Multiplex at Comic Fencing! 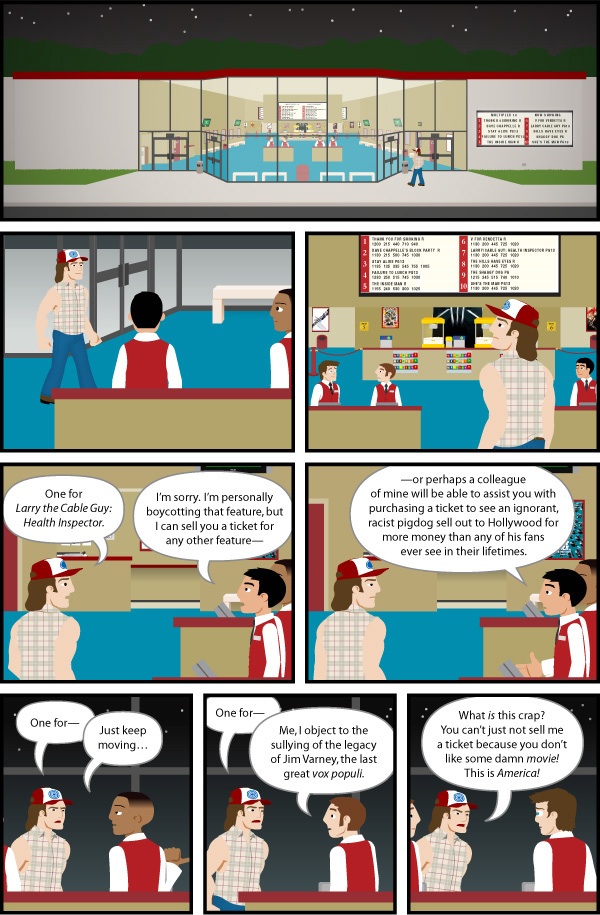 So does this mean Furry Week is over?

I originally had one more feature slated for Furry Week. I had played around with reviewing The Dreamland Chronicles or S.S.D.D., but those were too damn long. Thus I turned to a shorted title. However, it turned out to be so atrocious that, halfway through reading it, I realized that I couldn’t go any further.

Anthropomorphic people aside, it had a very interesting premise: two buddies start up an agency where they arrange suicides for clients. There was so much potential here for dark comedy in the Heathers sense. The first few stories involved moral dilemmas over taking such a job. But then it devolved into masturbatory fantasies over killing people that the author found annoying in the most gruesome ways possible. The rationale? That some people were so irredeemable that we were doing society a favor by taking them out of the gene pool. The clients, who must request for an assisted suicide before the duo can act, aren’t usually vile people, just very, very annoying. We know because the writer discusses at length in walls of text about why these people are pathetic and why they should die. Then they are gutted, decapitated, thrown off roofs, etc. And just to make the protagonists extra sympathetic, the clients always change their mind at the last second.

Wow, it’s like looking through the eyes of a SERIAL KILLER.

Reading an interview with the writer only lowered my opinion of him further. Apparently, the clients are based on real life customers he’s had to deal with. I know the service sector isn’t the best place in the world to keep your temper, but C’MON. He goes on to mention how one of his protagonists is held back because he feels he represents “that logical voice that says the duo must act in accordance with societal norms.” What, that “societal norm” of NOT killing people?!?!?!

So congratulations, furries. I hope you’re all happy, because you’ve officially broken my brain. We could have been friends, you and I, but for now and forever more we must be enemies. This nameless webcomic joins my growing list of titles that I will never review or mention by name because I find them so abhorrent that I don’t want to be responsible for giving them extra traffic.

For webcomics you should read: I was seriously caught off guard by the conclusion of the Skull Storyline in PvP. Yowza.

I won’t be around next week. I mean, it’s Fourth of July week! Time to go on vacation! That doesn’t mean there won’t be any features, though. They’re already here: just on a time-lapsed schedule. Oh, the magic of WordPress! They’re rather small features, though, and are hardly worth checking this site for.

Of course, if you know what’s good for you, you’d be on vacation, too. Get thee to the beach!

Most furry comics ask you to ignore any backstory as to why their comic is inhabited by humanoid creatures with animal heads. Hey, when it comes to Disney, you never question why a walking, talking mouse is the same size as a duck and a dog, do you? Purgatory Tower, on the other hand, provides a backstory that becomes an integral part of the plot. In a rite of passage similar to the Terrigen Mists from Marvel’s Inhumans, young humans are genetically fused to an animal species that represents their clan. The subject gains new powers, a coat of fur, and pointy ears. However, sometimes something goes wrong in the process, leading to unwelcome consequences. 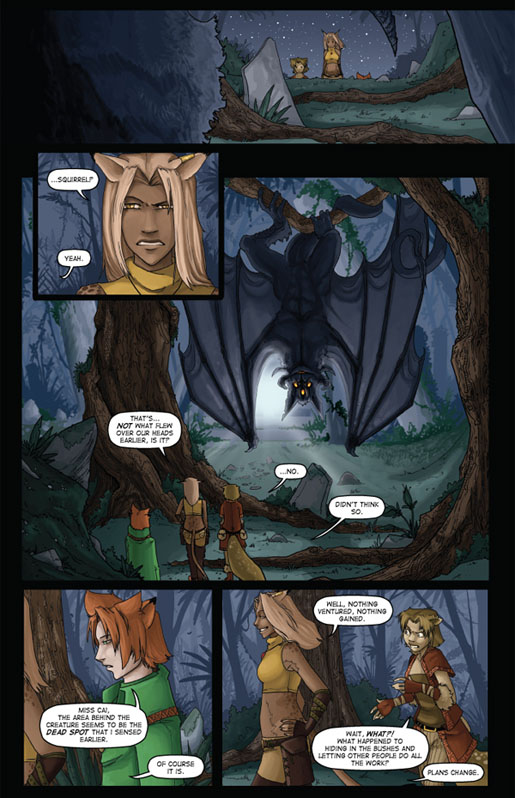 END_OF_DOCUMENT_TOKEN_TO_BE_REPLACED

Catgirls: hot or not?

Most anthropomorphic creations look too inhuman to be sexy. I suppose I have a certain amount of … well, respect isn’t the right word. Astonishment? Disbelief? … for afficianados who can look at a curious amalgamation of female body parts and snouts, jowls, or beaks and find it attractive. Yet, I’ll make an exception to catgirls. Not all catgirls, mind. Generally, the fewer overt feline cues, the better. Anything with whiskers is a tota turn-off, and if

the catgirl starts lapping a bowl of milk or playing with a ball of yarn, then I’m calling the cab and going home. Most renditions, though, barely look like cats at all. Rather, they look like humans with round faces, pointy ears, and button noses, and you can totally ignore that last one if you imagine that it’s actually a stylized rendition of a human nose.

The Japanese obsession with catgirls is well-documented. It’s like you can’t watch an anime series without at least one character showing up with a mournful “Nyoron~!” (For the advanced course, Theoretics of Catgirls II (CAT201), we will be studying whether or not Japan’s low percentage of cat ownership suppresses deep-seated affection that translates into a nationwide obsession with catgirls.) While you may be tempted to poke an laugh at Japan and snobbishly claim moral superiority, I should point out that we in the West are not above expressing cat love. Batman’s ladyfriend is the most famous example. Rival Marvel sports several from Black Cat to Tigra, but X-Men magna cum laude Chris Claremont came closest to developing the anthropomorphic furry ideal with Hepzibah of the Starjammers*. Cleo from Heathcliff & the Catillac Cats, Jenny from Bucky O’Hare, Felicia from Darkstalkers … they’re all pretty cool. If you wanted to take your obsession to unspeakable depths, there’s Omaha the Cat Dancer. A certain saucy minx has also captured the imaginations of the typically snippy Comics Curmudgeon readers even inspiring more than a few to wear a fairly questionable shirt that portrays Cassandra Cat in a bikini. (Not that I’m one to talk: behold my own Cass-inspired YouTube video scored to Steve Ibsen’s “Kitty Cat Dance.”)

So why does the central relationship between the human Art and the catgirl Kat Vance feel so very, very wrong? That’s just one of many questions I tackle in today’s review of Phillip M. Jackson’s webcomic, Sequential Art. 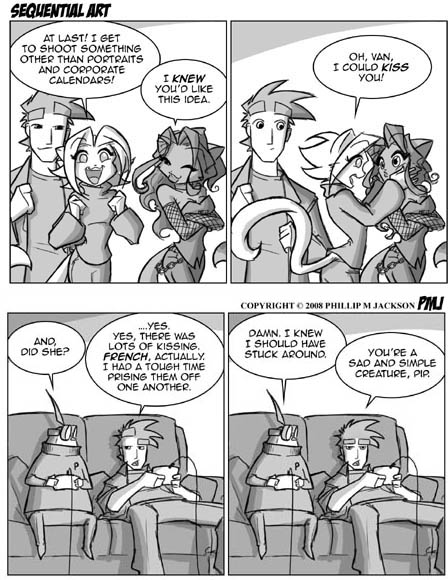 END_OF_DOCUMENT_TOKEN_TO_BE_REPLACED

The Wikipedia entry on “furry fandom” has this to say about media coverage:

Portrayal of the furry fandom by the media is generally unflattering, although recently there have been some attempts to supply a balanced viewpoint. Articles in Loaded, Vanity Fair, and the syndicated sex column “Savage Love” focused sharply on the sexual component of certain furries…. Most furry fans claim that these media portrayals are misconceptions, and some recent coverage focuses on debunking the myths and stereotypes of furries. A reporter attending Anthrocon 2006 noted that “despite their wild image from Vanity Fair, MTV and CSI, furry conventions aren’t about kinky sex between weirdos gussied up in foxy costumes”, that conference attendees were “not having sex more than the rest of us”, and that the furry convention was about “people talking and drawing animals and comic-book characters in sketchbooks.”

I can see where this entry is coming from. No likes to be stuck with the stigma of being a sexual deviant. In a way, I sorta hold furries in the same regard I hold cosplayers. They open themselves to ridicule by dressing up in ungainly costumes that they should’ve outgrown by the 5th grade and play childish games like furry Twister. Still, I imagine they’re no more goofy or perverse than Man-Faye or the guy in the Hello Kitty Vader outfit.

What really chafes me, though, is the unashamedly editorial nature of this particular wiki entry. There are fingerprints everywhere that this section is heavily guarded by defensive furries. Take the part that says “recently there have been some attempts to provide a balanced viewpoint,” for example. What are they talking about? That one article that no one read about an undercover reporter infiltrating AnthroCon? Call me a Wiki elitist, but this is one of those entries that should be flagged. I especially love how the entry needs to point out that, at the conventions, furries are “not having sex” and they spend their time to drawing animals. Wow! Just like your grade schooler does when she draws herself riding a pony! How can drawing animals be anything but pure and lovely?

When it comes to Jay Naylor’s Better Days, you come to the frightening realization that drawing animals isn’t the innocent, harmless hobby it’s made out to be. All those “unfounded” stereotypes in that Wikipedia entry are right here — shameless, naked, and out there for everyone to see. While there is no overt pornographic content, I should warn you that the content and links will be Not Safe for Work and Not Safe for Children. So if you’re either wasting company time or under the age of 12, I humbly suggest you follow this link to my review of Dean Trippe’s Butterfly, a whimsical little tale about a superheroic young boy. There’s nothing overtly pornographic about Better Days, but it is explicit. There’s also a very good chance you’ll run into ads for Naylor’s other pornographic projects. 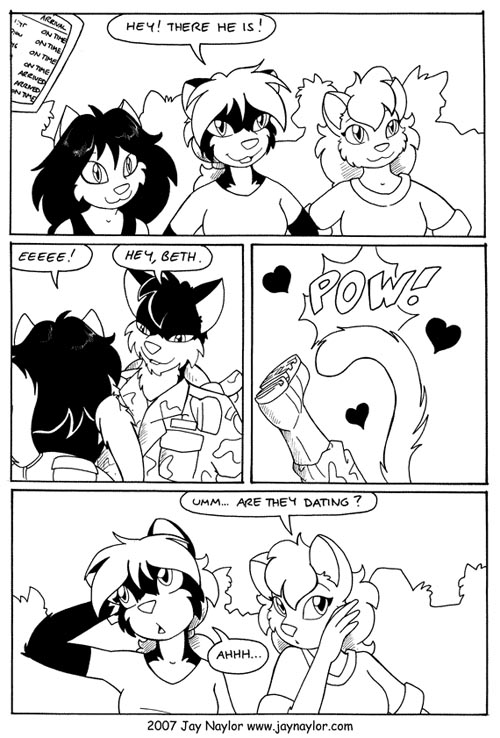