The AV Club website has been running a weekend piece called the Comics Page.  On a periodic basis, new artists are brought in to write a comic that features pop culture commentary.  A recent piece by Luke Meeken caught my eye, and I wrote in saying it was a shame that he didn’t do webcomics more often.

He replied back with a link to a previous project he’d worked on, currently archived at his website, Gilded Green.  The series, entitled “A. V. Dreamzzz”, are stream-of-consciousness musings about how you process pop culture as you drift off to sleep.  For example, leaving your headphones on and mixing up all the different podcasts you have on queue. Meeken heightens the dreamlike state by mixing in animated gifs to great effect.  Most other webcomics use these gifs to elicit humor or horror.  Here, the effect recalls how you cede control to the dream world in your subconscious.

Animation is one of those tools that are rarely used, likely due to the time commitment in creation and implementation.  However, it’s also one of those things that only webcomics can do, and it can never be effectively translated to paper. 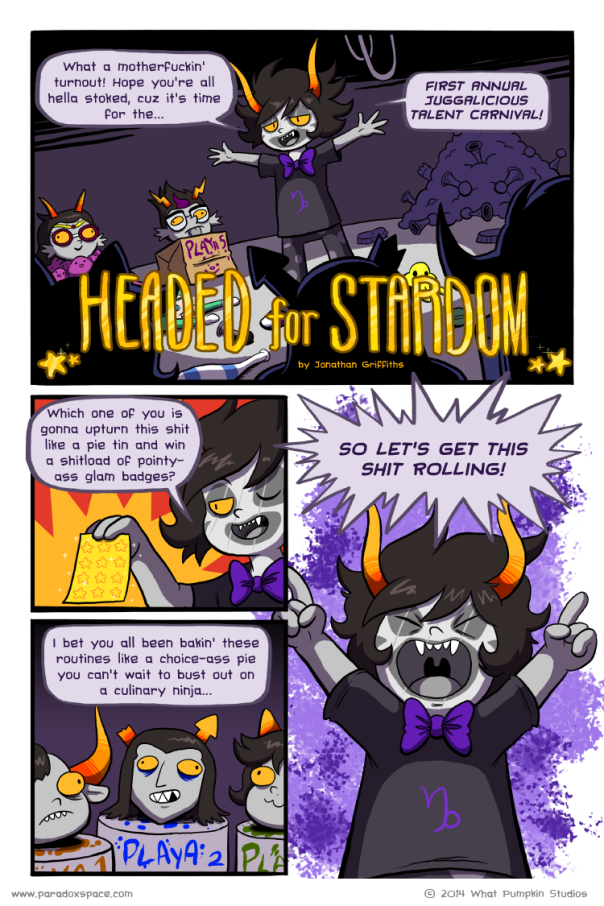 So… sick of Homestuck yet? Well, you’re about to get sicker. Andrew Hussie just launched Paradox Space, a home for canon Homestuck fan comics. And while that sounds like something that could go off the rails, Hussie is savvy enough to get fan comics from people who know what they’re doing. People like that Paranatural guy. And KC Green. And … I’m not sure what Jonathan Griffiths and J.N. Wiedle do, but it looks alright. 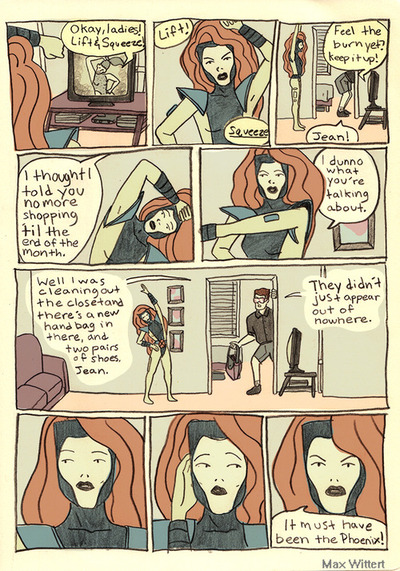 Well, feel free to sit this one out, then. I’ll have something more universal later this week. The ones who were around in the 90’s can stick around after the ellipsis.

OK since we all grew up in the 90’s, all of us will probably remember the Jim Lee/Chris Claremont version of the X-Men. It was the costumes and roster prominently featured in the cartoon, and one of the most unlikely sources of 90’s nostalgia. Max Wittert certainly remembers, and he illustrates the domestic troubles of Jean Grey and Scott Summers on his Tumblr-based webcomic Jean & Scott. Cyclops is uptight, which is pretty consistent with his established portrayal. Jean Grey, though, has been driven to terminal laziness due to the convenience of her powers. THRILL as Jean Grey struggles to hold her cream soda! CHILL as Cyclops wonders aloud why Jean has to use Cerebro and not a cellphone like most normal couples! I cannot wait for the episode when Jean finally meets Scott’s space-pirate dad.

Darkseid: the Satan of the DC Universe. Dr. Doom: Marvel’s most recognizable villain. Thanos: … the guy that was in the post-credits sequence of the Avengers movie. No, not the shawarma scene. The… the other one. When these three villains are together in one place, you can expect… discussion about Breaking Bad. And The Wire. Basically, just three dudes hanging out in a car, passing the time. That’s how Justin Jordan and Rafer Roberts envision it in Thanos & Darkseid: Carpool Buddies of Doom. 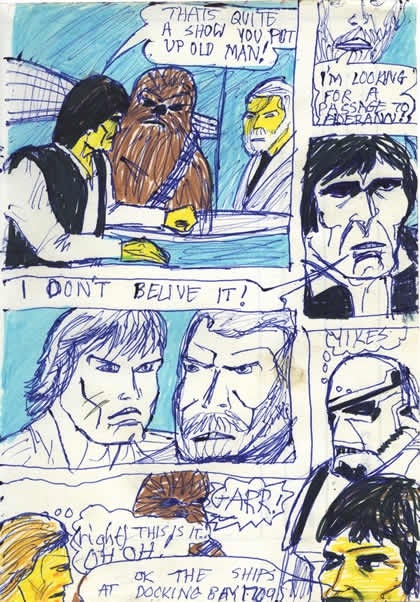 I used to draw a comic when I was younger. It was called “Ninja Bears,” a pretty transparent reinterpretation of the Teenage Mutant Ninja Turtles. If, for any reason, one of those pages ever turned up again I would shriek in terror and then shred the paper maniacally.

John White (a professional illustrator) is far more game. He recently unearthed his comic adaptation that he worked on when he was between 9 and 14 years old. Rather than destroying his primitive efforts in a fit of embarrassment, he released everything online as Star Wars: Age 9.

Now, is this comic readable? Technically, yes. It’s actually impressive to see what a kid can accomplish with little formal training. (Though, to be fair, White does admit that a lot of his panels were copied straight from Howard Chaykin’s Marvel Comics adaptation.). At the end of the day, though, it’s still a comic written by a kid, and that’s hardly ever appointment reading.

The real fun is in the annotations. From rediscovering where he picked up certain lines that weren’t originally in the movies to cheeky observations on his own art, Star Wars: Age 9 is just as much a written record of the fandom and their wild, impressionable imaginations as it originally took hold in 1977. The tone is nostalgic and wistful, with a touch of bemusement and a whole lot of images of vintage collectibles.

The webcomic includes all new illustrated panels drawn by an older John White… But sadly, these pale to the originals. After all, can these new panels claim the bold artistic decision to incorporate a collectible bubble gum card? I think not.

Nintendo video game mascot Mario Mario is no stranger to webcomics. Thanks to the crazy video game webcomic boom that gave the world the PAX video game convention, Mario has probably appeared in more webcomics than video games. Shoot, there’s probably a webcomic out there referencing Mario being created as we speak. However, there’s one aspect of the Mario universe that doesn’t get touched upon that often. You know, the one where King Koopa was evolved from dinosaurs and played by a greasy Dennis Hopper? The one where Mario and Luigi were trying to liberate a dystopian cyberpunk alternate dimension, clearly an aspect of the Mario universe that needs to be expanded upon and explored?

Why do webcomic creators always seem to cruelly ignore Mario and Luigi from the 1993 Super Mario Brothers movie?

Steven Applebaum and Ryan Hoss must be some sort of genies, because they’re making all your dreams come true with Super Mario Bros. 2: The Comic. SMB2: The Comic answers the question that has, for 20 years, been lingering on all our minds after the tantalizing sequel bait at the end of the movie: what happens to the Mario brothers after Princess Daisy returns from an alternate dimension, armed to the gills like some 90’s Image Comics superhero? This ain’t no run of the mill fanfic, people, as it’s mentioned that the story ideas come straight from one of the ten screenwriters from the movie. So it’s at least … one-tenthed canon, maybe?

Anyway, it involves going to another dimension which is probably the same world as the one from SMB2: the video game. And like the game, odds are Mario is going to wake up from a particularly vivid fever dream where someone, somewhere, made a webcomic sequel to the Super Mario Brothers movie. 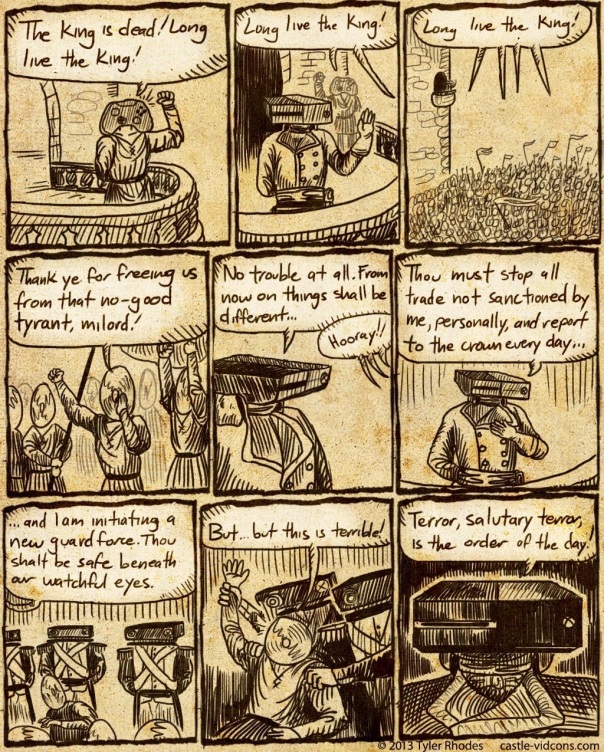 I’ve mentioned this webcomic before, but it seems high time to revisit this gem again. Tyler Rhodes’ Castle Vidcons was around during the previous generation’s console wars. The Wii, PS3, and Xbox 360 were depicted as rival kings doing battle in a sepia-tinged medieval landscape. Now that E3 has come and gone, the knives are out again this year. Xbox One and PS4 are cruel new usurpers, parroting the fears, anxieties and loyalties all over the Twitterverse and the Tumblrverse. Given how hyperbolic and pitched the fight has gotten already, Castle Vidcons is the only way to watch this epic struggle between warrior kings with consoles for heads unfold.

Random Quickies: So Your Life Is Meaningless 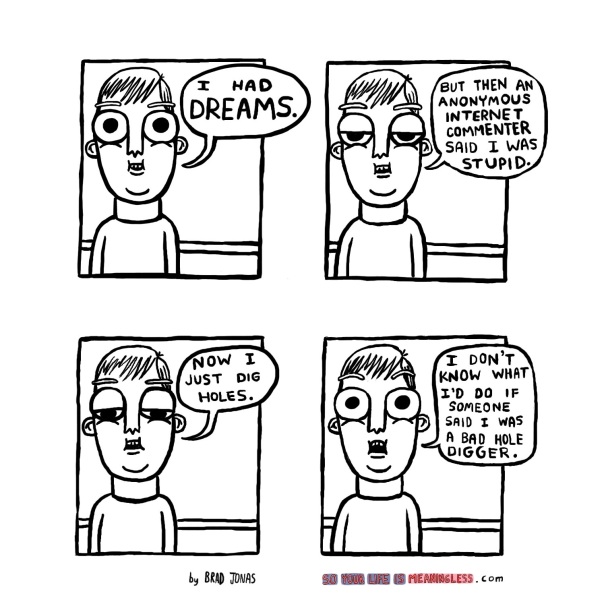 Get ready to laugh and feel super depressed at the same time with Brad Jonas’ So Your Life Is Meaningless. Whether it’s dealing with rejection or looking into the mind of Tom Jones, SYLIM is a sordid and often funny look on how everyday life kinda sucks.