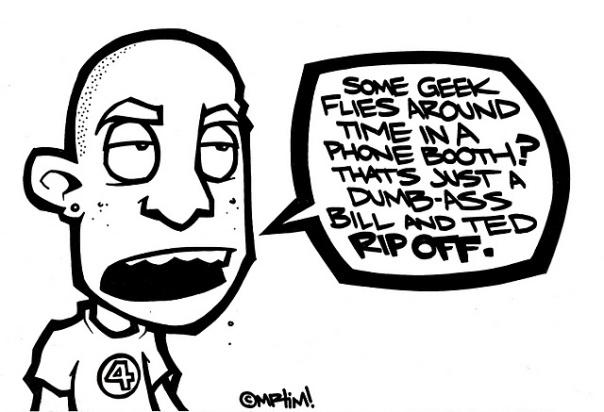 The Comic Book Guy from The Simpsons was a spot-on parody of the tubby, condescending comic shop owner who has no respect for customers. But what’s it like to see things through his eyes? Mr. Tim paints a dire but comical look at his customers in
Our Valued Customers. He holds up a twisted mirror to modern day geek culture with real things that he’s heard at his comic shop: the posers who put on an air of false toughness, the virgins who have obviously never talked to a woman, and the ones who think that watching Big Bang Theory over Community is a sign of geek pride. Man it’s enough to make you wish that geekdom wasn’t so mainstream these days … ESPECIALLY when you get to the one about Rob Liefeld, then you read the comments and realize that the fans of Our Valued Customers are the exact same ones that the comic mocks.

One of the most intriguing aspects about Ryan Pequin’s Three Word Phrase was the name. What did it mean? Most of the strips contained more than three words. I thought maybe it had something to do with the titles of each strip being three words long… but no. They were often less than three words. The webcomic site itself is rather barebones, none of the links offering any explanation.

It turns out I’m not the only person wondering about that name, and eventually someone got a response from Mr. Pequin on his Tumblr:

On to the review!

END_OF_DOCUMENT_TOKEN_TO_BE_REPLACED

Fleen reported yesterday that Websnark is back at a somewhat new web address. I checked in to see if he’s looking into webcomics again. The answer, I think, is no… since “webcomics”, in his opinion, is becoming an obsolete term:

That’s all. Just “Comics.” Webcomics are increasingly meaningless as terminology — I have access to several thousand of Marvel’s archived comics at will. I can buy almost anything from DC at a moment’s notice. There are few to no comics available in newspapers that can’t be seen on a website. Setting up an artificial distinction based on… well, community identification from 5-10 years ago just seems silly.

I argued that webcomics are still a valid term a while back myself. However, I’ll leave, you, the readers of the Webcomic Overlook, to decide. “Webcomics” — meaningless or not?

Oftentimes, Star Wars brings out the best out in people. Say what you will about Seth MacFarlane, but the guy seemed to be at his peak when he was doing Star Wars parodies on both Family Guy and Robot Chicken. Weird Al charmed millions of his fans with “The Saga Begins” … which was notably based on internet rumors and speculations about Episode One, not the official script. Turning back the clock, I remember totally marking out when Mark Hamill and C3PO showed up on Pigs in Space. And that Star Wars episode of Muppet Babies? Nothing but pleasant childhood memories.

Lucas may be something of a hack, but you have to give George Lucas credit for creating characters and scenarios that stay in that warm-and-fuzzy parts of your nostalgia forever. I think even Harry S. Plinkett would even agree to that. Star Wars was a little nerdy, but it was never as nerdy as the staid-by-comparison Star Trek. Epic and sometimes dark moments were balanced out by fun, creative touches. The movies imprinted both the iconically evil look of Darth Vader and the whimsical muppetry of Yoda into our fertile mental consciousnesses.

Star Wars humor is a natural fit for webcomics, too, with both Irregular Webcomic (featuring a long-running Star Wars parody) and Darth & Droids getting high marks from this site. We also have Blue Milk Special, Rod and Leanne Hannah’s own comedic twist on Star Wars.

Let’s take a look, shall we?

END_OF_DOCUMENT_TOKEN_TO_BE_REPLACED 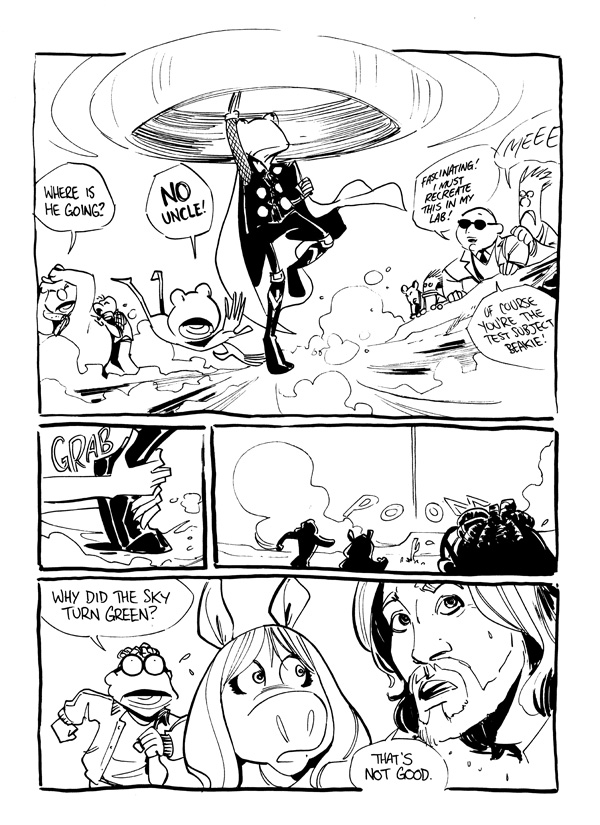 So first he proves to be an exceptional Green Lantern. Now Kermit the Frog is also … Frog Thor?

From the mind of Canaan Grall, Eisner Nominee for Best Digital Comic and creator of Max Overacts, and created from the fiery depths of 24-Hour Comics Day comes a tale of a frog, a hammer, and a rainbow connection. Witness the might and majesty … of Muppet Thor.

Metapost: spam. Not so lovely.

Just a heads up: this site has been hit with a lot of spam lately. While most have been caught by the spam filter (and it’s proven to be a super-efficient spam filter, considering what I’ve seen on other sites), a few have managed to seep through. Typically I sort through the spam to see if any legitimate comments have been incorrectly flagged and filtered out (and it does happen). However, when I wake up in the morning and I have something like 1,000+ spam messages built up in the queue, I figure if it isn’t worth it. If your comment somehow hasn’t showed up and was incorrectly deleted, I offer my sincerest apologies.

A review of Roswell, Texas, home of famous historical characters being Texas Rangers

Ludic Live has a review of the webcomic entitled Roswell, Texas. Reviewer Leonard Pierce was not very complimentary. 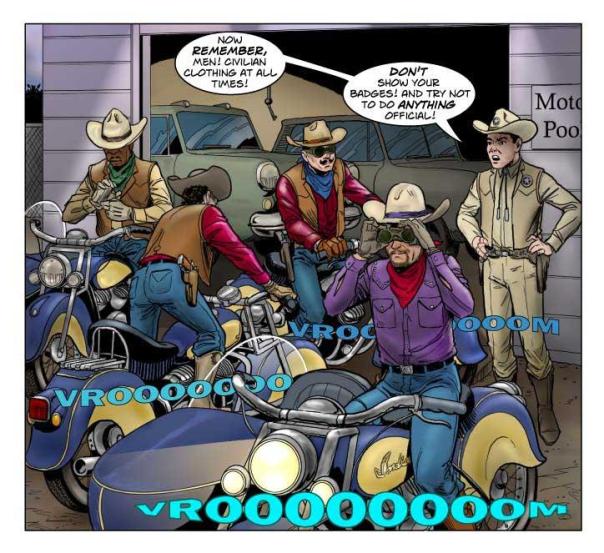 The comic is set in an alternate reality in which the Texans won at the Alamo and established a Libertarian-style Republic of Texas that lasts until the present day (or, at least, until the time at which the story is set, in 1964). This gives Smith an opportunity to show off his knowledge of history, which is unfortunate, because he hasn’t any. Historical insight is either misapplied or missing.

T.E. Lawrence is a main character, and he’s portrayed as maybe in his mid-40s. In fact, in 1947, he would have been 60 years old, and also dead. The president of Texas is Charles Lindbergh Jr., who is portrayed as a middle-aged man; but had the Lindbergh baby lived, he would have been only sixteen in 1947. Why not just make it Lindy himself? Especially when you consider that…

…the main villains in the book are Nazis. Which isn’t that odd, Nazis being the most convenient of all villains in any kind of historical fiction. What is odd is that one of the main characters is clearly established as being the daughter of Adolf Hitler, who moved to Mexico after WWI and became a successful painter rather than a fascist dictator. This makes it unclear how the Nazis rose to power. But just to make it clear that he hates them, the author establishes that the Nazis are all gay, and dresses them in pink uniforms and/or leather bondage gear.

I know, it sounds kind of awesome, right? But believe me, it isn’t so much nutty as it is just stupid. That’s one of the worst things about it — it takes these insane concepts and manages to render them boring instead of hilarious. If Harry Stephen Keeler had written it, it would have been amazing; with L. Neil Smith, it’s just ridiculous.

The Malcolm X thing is a perfect example: at first glimpse, I thought “Whaaa? He made Malcolm X a Texas Ranger? This could be great in a crazy way.” But Smith doesn’t do anything with the character. He literally has no personality. He’s just a sidekick who tags along and occasionally provides some plot service or exposition. He could have made him a radical black nationalist in real life, which would have provided conflict, or he could have made him the total opposite, a fawning Tom. But he didn’t do anything with him at all; he’s completely generic. So why make it Malcolm X? For no reason I can see other than for Smith to say “I am aware of the existence of famous black people”.

Faster than a speeding bullet, more powerful than a locomotive, able to leap tall buildings in a single bound! Look up in the sky! It’s a bird! It’s a plane! It’s Malaak: Angel of Peace! 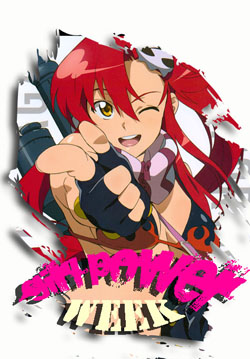 Yes, it’s Malaak, strange visitor from deep in the forests who came to the city with powers and abilities far beyond those of mortal women! And who, disguised as a student at a great metropolitan university, fights a never ending battle for truth, justice, and the Lebanese way!

Malaak was created by Joumana Medlej, a Lebanese illustrator. She has done drawings for children’s books, specifically a Lebanese heritage series. In her FAQ, she descibes Malaak as “Lebanon’s first and only superhero or adventure full-length series.” This comic is similarly aimed at readers who are typically younger than the current American fanboy crowd … that is, younger than 30, at least. 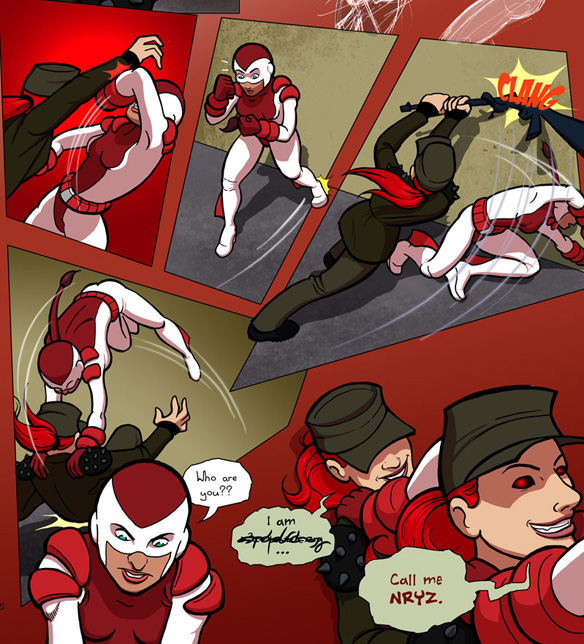