I need to make it clear that I don’t hate it when authors bring up the issues in our society regarding how women are portrayed and treated, especially in the media. It is an important topic and one that should be talked about. I personally find it quite disturbing how people will attack an author for even mentioning that the problem exists. And I am a big fan of Sinfest, I think Tatsuya Ishida is one of the best writers and artists on the internet. He has given us some excellent characters and some great, heartfelt moments. He can even make Satan himself sympathetic.

I think the main source of vitriol comes from the fact that despite the idea of feminism being about breaking down gender barriers so that men and women can truly be seen as equals, most people are likely more familiar with straw feminism, in which the movement is portrayed as women trying to dominate the world by enslaving men. This is because it’s the version that gets portrayed more often in the media as it is an easy story telling trope with more opportunities for drama rather than the reality of women just wanting respect and to feel safe.

END_OF_DOCUMENT_TOKEN_TO_BE_REPLACED

There seems to be two schools of thought in how to present comics these days (and these include webcomics). The first is storytelling in the most traditional approach. Explain events using little comment boxes and exposition. It paces things out so you can get a somewhat complete story in around 22 pages or so. Generally, webcomics in this category are Spacetrawler and Order of the Stick. Simpler pictures, heavy on dialogue.

On the other end, there’s the “show, don’t tell” school or comics — decompressed storytelling. These are usually the ones heavy on mood and imagery. They take their time. The joke with some recent comics, for example, is that it takes 6 issues now for comics that used to take 1. (I think Bendis’ run on the Avengers titles are good examples of this.) In this category, more contemplative comics like Ectopiary and What Birds Know.

Both have their advantages, and it usually boils down to narrative vs. visuals. There are also plenty of comics in the middle ground. However, between the two extremes, which do you prefer: compressed or decompressed storytelling? 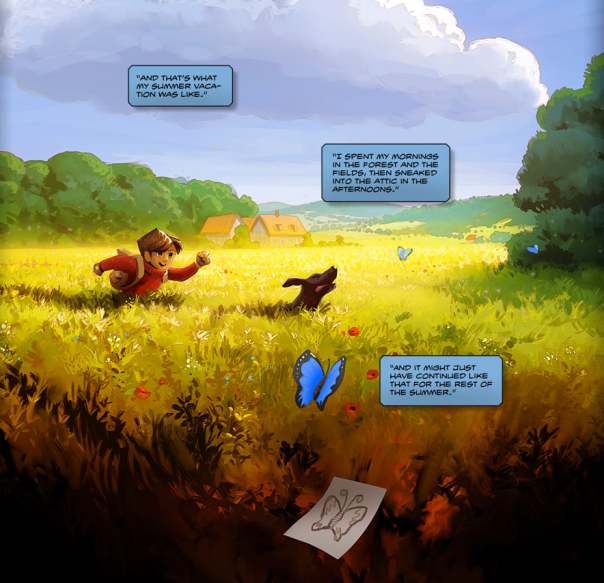 Daniel Lieske’s The Wormworld Saga is probably going to get a proper review sometime in the future.  But man, I just wanted to bring it up because it’s probably the best looking webcomic I’ve seen to use the infinite canvas in quite some time.  It’s fairly simple: it’s just an up and down thing.  However, panels blend seamlessly to the next as you keep scrolling downwards.  The story itself is sort of a modern day Alice In Wonderland, and the visuals get more and more incredible the further you get into the story.  Though, truth be told, I was already plenty impressed by the rendition of a red Volkswagen in the very first chapter.

So how big what this year’s “Shill Your Webcomic” post? Well, let’s put it this way: last time I did something like this, I had 24 responses. This time around, let’s say I had a few more. So much more that I had to reduce each webcomic link to a tiny thumbnail.  Here are the gracious folks who were kind enough to share a link of their webcomic or a webcomic they rather liked. Click on a thumbnail to check ’em out!
END_OF_DOCUMENT_TOKEN_TO_BE_REPLACED

(Another piece by David Herbert!)

So last week I took a few shots at Blind Ferret Entertainment and after I sent it to El Santo, I started expecting people to call hypocrisy since my own comic, Living With Insanity, was inspired by LICD in its early days. And I freely admit that back in the day Sohmer was everything I wanted to be as a creator. He did two comics that were popular and never missed a deadline. I liked the humour and thought Looking For Group was progressing well as a story although I changed my mind there.

But as I got older, a combination of things caused me to re-evaluate my choice of idol. Last week’s column has a few of those reasons. The Straw Man and Marty Stu articles have some of the others. This arc was probably the final straw. I’m not fond of who I was and wanted to be back then, but that’s life. You make decisions and then later change them if they no longer work for you.

END_OF_DOCUMENT_TOKEN_TO_BE_REPLACED 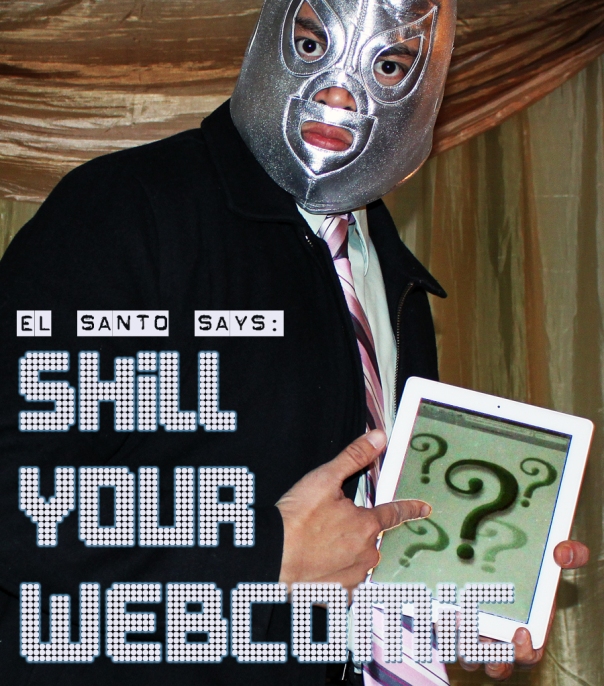 You know, it strikes me that I haven’t done something like this in a while.  A long time ago, I once put up a sorta free post to let readers send in links to webcomics that they were working on.  It’s something I should be doing more often.  For what is The Webcomic Overlook without its readers?  Fortunately, fellow critic Fogs at Fogs’ Movie Review decided to do a “Plug Your Blog” post, something that went over well with the readership.  It was high time I did the same.

Hey there, readers!  Do you have a webcomic?  Or a webcomic that you think deserves more attention that it currently has?  Or do you have a blog discussing webcomics?  Well, now is the time!  Put a link to your webcomic under this very post!  Go ahead: shill your webcomic!

It’s that time of year again! That time we play “What’s that webcomic?” with the current crop of Eisner nominees for Best Digital Comic. This is not a commentary on the quality, per se. They’re usually somewhere on the scale of good to great. But … what are these? Last year, at least, there were several names I at least recognized: Josh Neufeld, Mike Norton (who eventually won for Battlepug), Tony Cliff with Delilah Dirk, Dylan Meconis, and Ryan Andrews, who did Sarah And The Seed. Pretty recognizable, eh?

This … I have no clue about what any of these comics are about. This may be a sign of my own advancing age, perhaps a signal that I should just go, “Well, El Santo, you had a good run… but webcomics are a young man’s game.” After which I spit out my chaw and ride forlornly into the sunset to a score set by Ennio Morricone.

Nevertheless, here they are, with my vague attempt at guessing what each of these webcomics are about based on the title alone:

As always, I will review each and every Eisner nominated comic before the winner is announced at the San Diego Comic Con. I have a bad feeling that the Sugarshock!-o-meter is going to be uncalibrated for this one … but we must have faith that, each and every year, it will predict the winner with full accuracy.

I should also point out that Colleen Coover of Bandette is also up for Best Penciller/Inker and Best Colorist, so I’m a little excited about checking out that webcomic. Ryan North and Meredith Gran are getting props in the printed world for their Adventure Time comics (Best Humor Publication, Best New Series, and Best Publication for Kids for North; Best Publication for Teens for Gran). Sailor Twain, by Mark Siegel, is up for Best Graphic Album – Reprint. And El Santo was once again overlooked for Best Comics-Related Periodical/Journalism.

This is when the Morricone track comes to a sudden stop, I turn my head to stare at the camera, and a fire erupts behind me as the background goes a blaze. Freeze frame, a “To be continued…?” caption, end scene.

After man first set foot on the moon, young kids dreamed of voyaging to other planets. After all, if human beings can put their footprints on soil not of this earth, how hard can it be to, say, go to Mars? As it turns out… very hard. Universe Today estimates that the journey would take 250 days. And that’s the nearest planet. How long is it going to take to get to the moons of Jupiter? To the rings of Saturn? Heck, are we even going to get out of the solar system?

So we resign ourselves to the fate that most deep space exploration is going to have to be conducted by robots and computers. Like Voyager 2 and it’s ground breaking tour through the outer planets. Or Mars rover Curiosity, journeying the red planet to unearth new scientific discoveries. Is it as thrilling as Neil Armstrong hopping off a lunar lander? Maybe not. At the same time, I’d be lying if I said I didn’t feel a pang of empathy when the Spirit rover got stuck in sand. Sure, it was just a piece of machinery. And yet, it had sort of anthropomorphized into a poor little explorer stuck on a weird alien world.

James Anderson’s Ellie on Planet X is the story of one such space probe. this one, though, is a whole lot more adorable than anything assembled by NASA. Well, maybe except for Sojourner. That one was pretty darned cute.