There’s something about editorial cartoons that can be incredibly dangerous. Offend the wrong groups, for example, and you might find yourself running for your life. With televised, audio, or print media, you can build up or soften your argument by surrounding it with empirical evidence. There is rarely such a safety net for one-panel editorial cartoons. They are immediate an powerful in their brevity. The concise format strips the opinion to the stark naked core.

Josh Neufeld’s Eisner nominated webcomic, Bahrain: Lines In Ink, Lines In The Sand, follows the struggles of two editorial cartoonists living in Bahrain, a country caught in a politicl turmoil that, as of this writing, is still making news at the Bahrain Grand Prix. Neufeld has previously reported the personal stories of people caught up in Hurricane Katrina with AD: After the Deluge. Now he uses the same techniques, applied on a smaller scale, to take at look at the Arab Spring. It’s fairly short at 17 pages, but perhaps that’s as long as it needs to be.

END_OF_DOCUMENT_TOKEN_TO_BE_REPLACED

The Webcomic Overlook #196: The Revolution Will Be Televised

On December 17, 2010, Mohamed Bouazizi had had enough. He’d been us he’d too far by local authorities. He was a poor street vendor from Tunisia who was struggling to feed his family. Unfortunately, his small wheelbarrow, from which he would sell produce, would constantly be confiscated by corrupt local officials. Eventually, he would find himself in debt. He would not have enough money to bribe officials to keep his stand open.

after his latest confrontation with an official, Mohamed went to complain to the governor’s office. They refused to see him. So Mohamed got a can of gasoline. He stood in the middle of traffic, and he shouted, “How do you expect me to make a living?” Then he doused himself in gas and set himself on fire. Mohamed would die a couple of weeks after at the young age of 26.

What would happen after would go on to be known as “Arab Spring.” The violence of Mohamed’s death shocked young Tunisians, who took to the streets in protest against corruption in the government. and it was not confined to Tunisia. The protest spread to Algeria, Jordan, Yemen, and Egypt. And then they spread further. The winds of change spread throughout the Arab world. It was a calamitous time. One one end, there were the indelible images of women handing flowers to soldiers. As the other end, there’s the bloody toll: Wikipedia has listed the number of deaths at 32,000 to over 50,000.

Dov Torbin and Asher Berman planned on taking a vacation to Egypt when all hell broke loose. What had been a trip to see the sights of ancient Egypt suddenly becomes a struggle to find a working phone so they can talked to loved ones back home. They recount their experiences in The Revolution Will Be Televised. 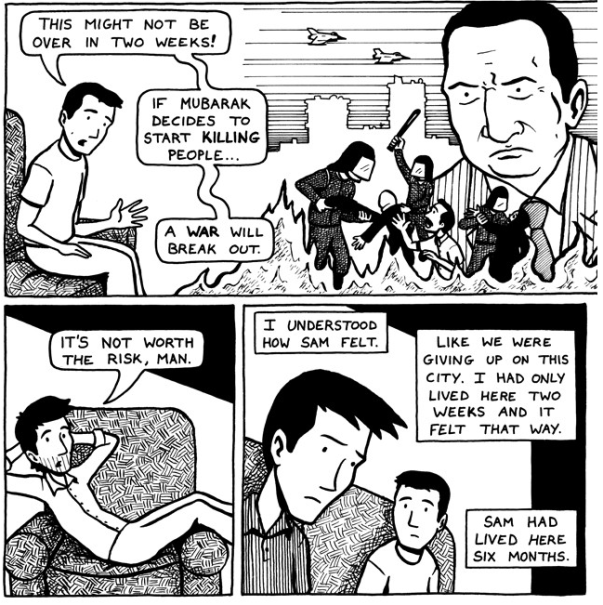 END_OF_DOCUMENT_TOKEN_TO_BE_REPLACED

One Punch Reviews #24: A.D.: New Orleans After the Deluge

It’s not often that webcomics tackle serious subject matter. It’s even rarer when creators take the time to interview people who lived through traumatic real world events, then captured their experiences through illustrations. Creator Josh Neufeld, though, a Xeric Award winner and a founding member of ACT-I-VATE, was up to the task. Neufeld interviewed six different people about what the trials and tribulations they faced on the worst storm that New Orleans ever experienced and made a comic out of it.

This month, the highly acclaimed webcomic A.D.: New Orleans After the Deluge hits the bookshelves. (Amazon.com places the release date at August 18.) The “deluge” in the title is, of course, Hurricane Katrina. The comic was originally serialized online between 2007 and 2008 in Smith Magazine. It was recognized in several publications, including Rolling Stone, the LA Times, the Wall Street Journal, and Newsweek. USA Today named it as one of 2007’s best comics.

Notices like these, by the way, can sometimes be detrimental. They can intimidate potential readers who see the attention the comic is getting from mainstream media reviewers and deduce that the work is difficult, given how praise is usually only bestowed to difficult works. Well, don’t be frightened. The voices of A.D. are those of everyday people, and the straight forward storytelling puts you in the shoes of those who witnessed it.