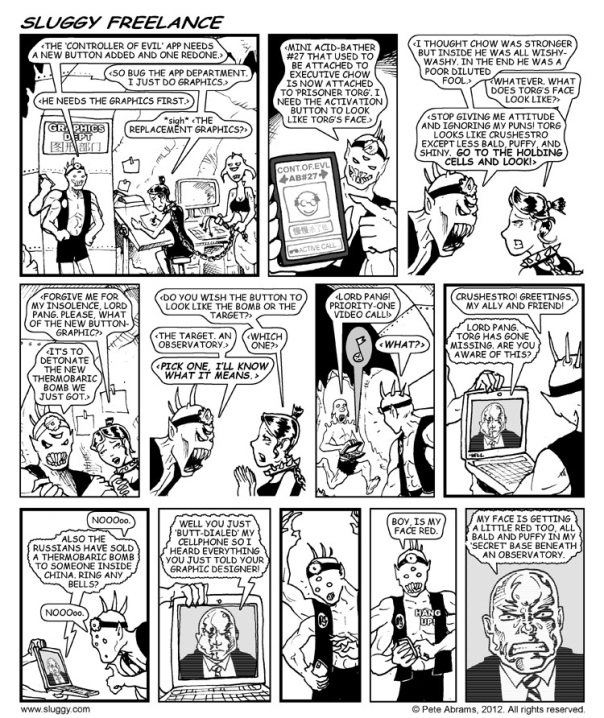 Of all the comics out there, Pete Abrams’ artistic style on Sluggy Freelance seems to never to visually change. Some people see consistency. Some people see stubbornness. Are you a fan of the art? Yea, or nay?

Stories of disenfranchised youth are all the rage these days. None strikes to the heart as much as the story of a young greaser named Ponyboy. (I should probably make this clear in this day and age that he’s not named “Ponyboy” because he’s way into My Little Ponies.) The rich kids are known as the Socs — short for Socials. Early in the story, Ponyboy gets attacked. This bings to a head a class struggle set against a dusty Oklahoma setting. After a tragic incident occurs, Ponyboy soon finds himself many miles from home, trying to sort things out and in the processes becoming wiser than when he started.

OK, look. Time out. Obviously I didn’t really mistake the infamous S.E. Hinton novel — whose movie adaptation launched the careers of Tom Cruise, Patrick Swayze, C. Thomas Howell, and Diane Lane — for today’s reviewed webcomic. I mean, geez, this isn’t Young Adult Novel Overlook. To tell you the truth, though, Jim Francis’ Outsider is not that much different. Just substitute Ponyboy for Alexander Jardin, the Socs and the Greasers with the warring Loroi and Umiak, and Oklahoma for outerspace. It’s fairly easy to confuse, admittedly, so here’s the big difference. The Outsiders is the one you were forced to read in junior high. Outsider — no “s” — has alien space babes.

There should be no question which one here is the superior product. 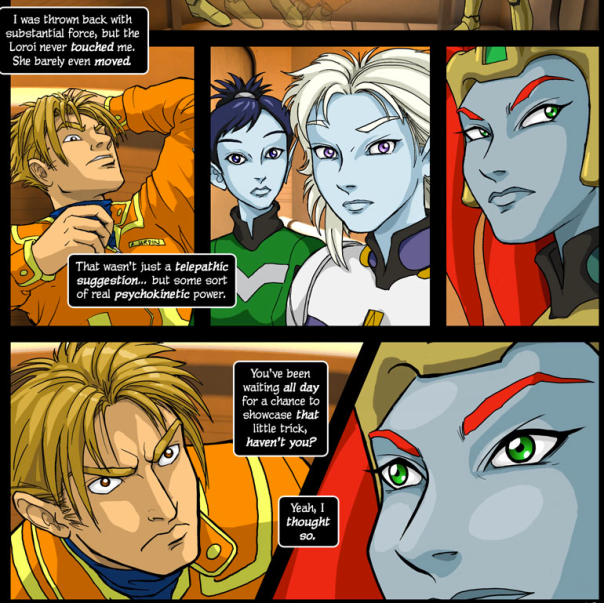 END_OF_DOCUMENT_TOKEN_TO_BE_REPLACED

Who Are You?: An Interview with Henry Kuo (Just The First Frame) 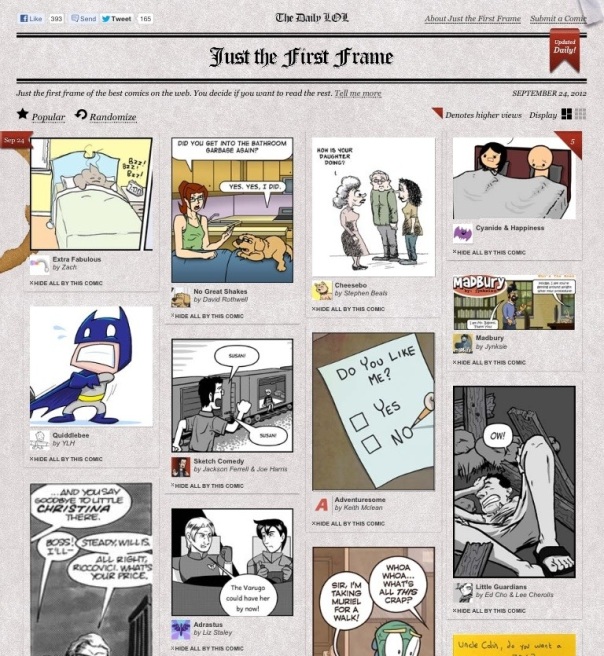 Finding new webcomics is a daunting business. As any two people what their favorite webcomic is, and — outside of “What’s a webcomic?” — you’re likely to get two very different answers. There are many, many webcomics out there, almost as many as the grains of sand on the beach, and sifting through them is a chore. We often settle on comics that are recommended to us, but rarely do we find a gem out there on our own.

Recommending webcomics online has its challenges, too. The nature of the internet means that anyone can just download a panel and post it anywhere. The problem, though, is when no one gives credit or a link to the original comic. Webcomic creators collect money mainly through advertising, and losing revenue when someone posts a panel outside their site can really hurt a struggling artist… and that’s something that most webcomic readers don’t want. Things came to a head not too long ago when someone developed a webcomic reader app, only to become the target of angry webcomic creators and supporters.

At the same time, though, webcomic creators, especially those with 20K viewers or less, need all the publicity they can get. There’s so much out there competing for our eyeballs.

Creator Henry Kuo put together a fairly elegant system: post a small snippet of a comic. (Or “just the first frame,” as the URL says.) If it manages to catch your eye, you click on the image and it directs you to the site. If you only want to read the comics that are popular, there’s a handy feature that sorts the comics based on how many people are reading it. The readers get a simple, visual way of browse numerous webcomics without leaving the main page. The webcomic creator doesn’t lose revenue, because the entire comic is only available on their site. Everyone wins!

I recently asked the hard working site master about the inner workings of Just The First Frame. Here’s what he had to say:

WCO: With the number of webcomics out there likely beyond the tens of thousands, do you find maintaining your site to be a little daunting?

Henry Kuo: I’m only including and updating comics that have been suggested to me, so it stands at 586 right now. Early on, I had concerns about how I would maintain the site as the number of comics quickly grew, but every once in a while, I would find something simple to make the process quicker, and I’d be confident I could keep up even if it grew to X amount of comics. I think I could comfortably handle about 1000 right now, but beyond that, I’m not completely sure what I would do.

WCO: Have you ever had to reject webcomics from the site based on content, artistic skills, etc.?

Kuo: The only comics I’ve rejected are ones that are NSFW. Other than that, I don’t really want to be a gatekeeper on what gets included and what doesn’t. I just don’t feel it’s my right to say yay or nay based on my personal opinions. As long as it’s a web comic, I’m more than happy to include it. I did add a link beneath each panel that lets you hide specific comic series, so everyone can do their own personal filtering.

WCO: What has the response been like from webcomic creators?

Kuo: I’m honestly very honored when an artist suggests their comic to my site, and I’ve received nothing but gratitude back in return. In the beginning, I was ready to remove the site entirely if there was any negative feedback, but the reaction was quite the opposite and I was and still am very humbled by it.

Actually, there were a few complaints about the use of the word “frame” instead of the correct term “panel”, and I take complete responsibility for that error, but I just kind of liked the alliteration of the F’s and kept it, though I’ve always been open to change it.

END_OF_DOCUMENT_TOKEN_TO_BE_REPLACED

Posted in The Webcomic Overlook, webcomics, Who Are You

Metapost: Mobile readers… you are now reading a duplicate of the main site format 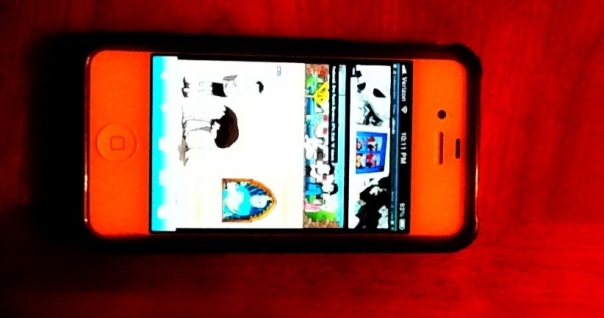 A heads up for the readers who check in on this site using mobile phones:

I noticed that, when checking my site on my phone, it ended up looking a little wonky. I’m pretty sure it has 100% to do with the new style ads that WordAds has been running. You know, big blocks of YouTube that are a little weird, like supposedly secret camera footage of a pregnant Jennifer Aniston drinking water. I have never clicked on these, so I wouldn’t know. Anyway, I brought the problem to the WordPress team, and they got back to me and said that they’d bring this to the attention of their corporate partners.

Still, the formatting issue is admittedly bothersome, so for now I’m going to shut off the mobile version of the site. If you’re reading this on a mobile phone, you should probably be seeing the site exactly how it would appear on a desktop, laptop, or tablet. Anyway, sorry for the inconvenience!

When reading Barry R. Hoare’s Ends ‘N’ Means, I can’t stop thinking of the phrase, “Hey, Lois, remember the time…” I have no idea why. What Lois am I thinking of? Lois Lane? Lois Maxwell? Lois from work who does database management? Why am I asking her to remember anything? I don’t even work on the same floor.

END_OF_DOCUMENT_TOKEN_TO_BE_REPLACED 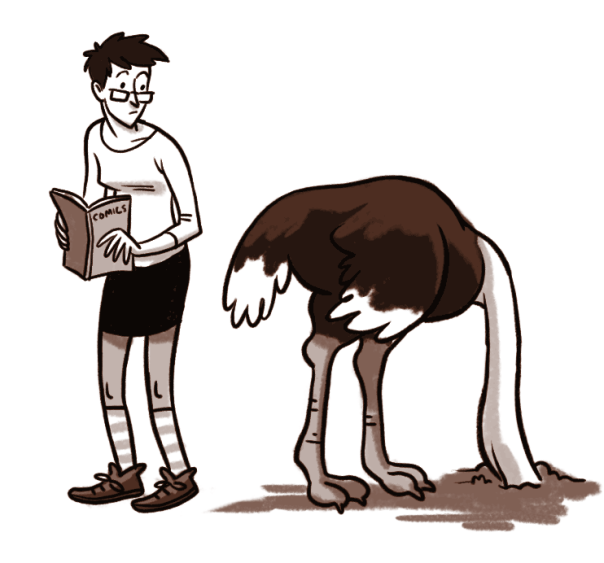 So, earlier this week, Dylan Meconis — renowned webcomic creator behind Bite Me, Outfoxed, and Family Man — wrote a piece entitled “How Not To Write Comics Criticism.” My first thought was, “Oh, no, after years or snarkily criticizing comics, Dylan Meconis has finally come after meeeeeeeeeeeeeeeeeeee! Awesome!” Of course, like that song says, I’m so vain that I probably think this blog post was about me.

Ms. Meconis was actually going after writers of more mainstream magazines who sorta look down on comics or don’t know much about comics at all. Admittedly, I don’t run into these often, but I usually stick to fringe sites where the writers know what they’re talking about. In the more mainstream publications, I imagine they tend to hire starry-eyed young kids who think they’ll be reviewing the next Heartbreaking Work of Staggering Genius, but are instead given a graphic novel to read through. Ms. Meconis takes these writers to task:

However, one group wasn’t served by “How Not To Write Comics,” because this group is not interested in writing comics per se. They are interested in writing about comics – or their editors are forcing them to try. Because now that comics have infiltrated the mainstream book trade (and the reading lists of grownups) in the form of graphic novels, memoirs, and trade collections, an increasing number of critics are faced with the task of reviewing the damn things.

The results are, shall we say, mixed.

For every column inch of well-considered and well-informed discussion, there are fifteen yards of lazy, confused, condescending, clueless, unhelpful, and sometimes even frankly hostile copy.

Some of these critics are just jerks who resent that their editor has torn the galley copy of the latest Houellebecq novel out of their hands and replaced it with some stupid book with pictures in it. Pictures. Only Umberto Eco gets to use pictures!

I can’t help those people. I just feel bad for them, because they’re going to miss out on a lot of wonderful and important books.

Ms. Meconis then outlines several items about how to write comics criticism, such as avoiding the tired trope of “Comics aren’t for kids anymore” or sidestepping the whole “it’s not a comic, it’s a graphic novel” discussion. Her last point was fairly poignant.

Another error bred by too narrow a reading list. A critic reads a comic book (“Book A”) and finds some aspect of it striking. The critic has only read one other comic book (B). The critic then adds two and two and gets seventeen: clearly, Book A is deeply influenced by Book B. This leads to a lot of bizarre attributions that seem less like comparing apples to oranges and more like comparing apples to Kevin Bacon. Surely you must see the clear influence that Spider-Man has had on MAUS!

Alternatively, the critic can’t stomach the thought of referencing other comic books at all, or can’t remember even a single one (I once met a graphic arts professor so impressed with himself that he claimed not to have heard of Garfield).

So she spends the entire review talking about nothing but prose work and fine art, etc., as if the cartoonist had invented an entire new medium from the leavings of greater art forms.

Comics in their current form are a tradition dating from the 19th century – like film and the modern novel – but static-words-and-pictures-telling-a-story-in-sequence are as old as words and pictures and nearly as old as sequences; to express such surprise at the notion implies that you’ve been asleep at the critical wheel.

Man, can’t say I’m not ever guilty of that. Still, I think I avoid most of Ms. Meconis’ pitfalls to comic criticism. Hey, maybe this means I should start spreading my resume to far more literate publications than this meager blog, eh? Hey, HARVARD BUSINESS REVIEW! CALL ME! 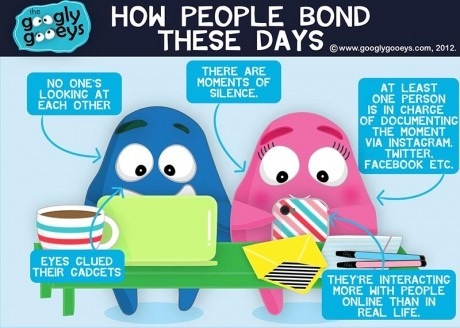 I don’t know about Tipsy and Ponngo other than that they are a couple and that they hail from the Philippines. I’ve been to that country a few times, so I’m going to go ahead and assume that, in real life, they look nothing like the blue and pink blobs that we see in Googly Gooeys. This very colorful little webcomic chronicles the silly challenges of a modern relationship … which seems to be increasingly dominated by LED screens that are growing ever so small.